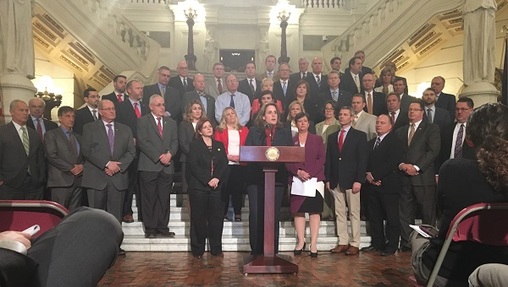 The effort comes after one of their members–Delaware County’s Nick Miccarelli — was accused of harassment by fellow House Republican Tarah Toohil, of Luzerne County.

She now has a restraining order against him.

A few other lawmakers have also been accused of harassment in recent months.

The GOP measures diverge significantly from previous solutions offered up by Democrats. And despite both caucuses maintaining they want to work together on the issue, they’ve drafted the plans separately.

One Republican proposal would create a task force made up of attorneys, victim services professionals, employers, and others to review statewide harassment and sexual misconduct regulations.

The other would have the Joint State Government Commission do a similar assessment of harassment and discrimination laws that apply to state employees.

“There has been a lot of discussion on, ‘Why aren’t you doing something? Let’s do something,'” he noted. “We wanted to be very deliberative, not have a knee-jerk reaction when things come out.”

Asked if the action was prompted by deficiencies in the current process for dealing with harassment, House Majority Leader Dave Reed said it wasn’t–mostly.

“I freely admit it’s a process that I hope nobody else has to go through,” Reed said, referring to the conflict between Miccarelli and Toohil. “I do believe the process worked very effectively…the one thing that did kind of sit with me…was that a lot of discretion in the process is dependent on individuals who sit in office, like myself.”

Reed said he thinks additional checks and balances are necessary to make sure individual lawmakers don’t mishandle harassment issues in the future.

However, “before we go out and pass legislation, we need to understand what we have in place,” Cumberland County Representative Sheryl Delozier added.

Among other things, they’ve recently offered bills to extend the statute of limitations on harassment complaints, require discrimination and harassment prevention training, and expand workplace protections.

Governor Tom Wolf has thrown his support behind those measures.

A spokesman for the House GOP said they’ve discussed their proposals with Senate Republicans, but not with any Democrats.

A House Democratic spokesman said he hopes the parties can compromise on a joint package of bills.

Despite conflicting claims, it's unclear who's really ahead in GOP primary