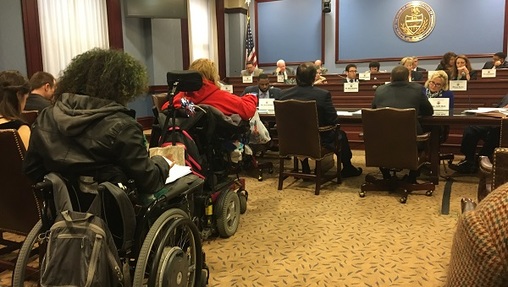 A number of protesters in wheelchairs attended the committee hearing on the bills to create new work requirements and other welfare restrictions. (Photo by Katie Meyer/WITF)

(Harrisburg) — The state legislature has moved two bills that would create work requirements and otherwise tighten regulations for Pennsylvanians getting state benefits.

As committee debate on the measures stretched more than two hours, protesters in wheelchairs crowded the hearing room.

They were from the Philadelphia chapter of ADAPT, a national disability rights organization. And though the protesters in wheelchairs wouldn’t likely be the ones losing benefits under the proposed restrictions, organizer Nancy Salandra said she’s concerned nonetheless.

“That’s what they say–but it’s all the beginning of what they want to go after,” she said.

One of the bills that passed–House Bill 2138–would require able-bodied people between 20 and 64 to work 20 hours a week, or go to 12 job-training sessions a month to get state health insurance. The other–House Bill 1618–would make benefits expire if they’re not used for six months.

The former bill includes a number of exceptions, including for pregnant women, people with permanent disabilities, families with young children, and people struggling with addiction or mental health crises.

Supporters say in the case of benefits sitting dormant, about 27 thousand accounts have been unused over six months, and two of those contained more than a thousand dollars.

Many Democrats, including Philadelphia’s Jason Dawkins, questioned whether that justifies restrictions.

Luzerne County Representative Gerald Mullery noted, he’s a rare Democrat who is typically in favor of work requirements and similar measures. Though he ultimately voted yes on both the bills that passed, he did advocate taking more time to make sure the measures are justified.

“The answers that we’re getting seem to indicate that this bill may be a solution in search of a problem,” he said.

A third bill would have added work requirements for the Supplemental Nutrition Assistance Program, but was held back to be amended further.

The House is expected to act on the bills soon. It’s unclear what the Senate will do.

A spokesman for Governor Tom Wolf says he opposes the measures.

This article has been updated to reflect the correct descriptions of House Bills 2138 and 1618. In the initial version, the bill numbers were reversed.