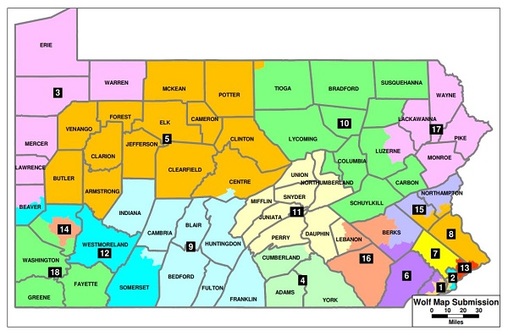 Governor Tom Wolf submitted a map that he said “has the same number of overall splits as the Republican leaders’ joint submission but reduces the number of counties split more than once.”

(Harrisburg) — Democrats’ chances at picking up congressional seats in Pennsylvania would likely improve under new proposals redrawing district boundaries to replace the ones thrown out in a gerrymandering lawsuit.

Republicans and independent analysts came to the same conclusion Friday, hours after Democratic Gov. Tom Wolf and others submitted maps on a state Supreme Court deadline.

An analysis conducted through PlanScore.org concludes that Democrats’ proposed maps would reduce the partisan tilt in the boundaries that currently favor Republicans, although their maps still largely favor the GOP. Pennsylvania’s 6-year-old congressional district map is widely viewed as among the nation’s most gerrymandered.

The court is starting the four-day period it gave itself to consider proposals and issue new boundaries for 2018’s elections. Republican lawmakers are threatening a federal lawsuit to block any new boundaries.

Penn State THON: Meet the York County student at the center of this huge fundraising event