A military battlecross sits in the front of the stage at the Giant Center, in honor of Deputy U.S. Marshal Christopher Hill's military service.

Trusting News: Wrestling with editorial decisions in times of tragedy 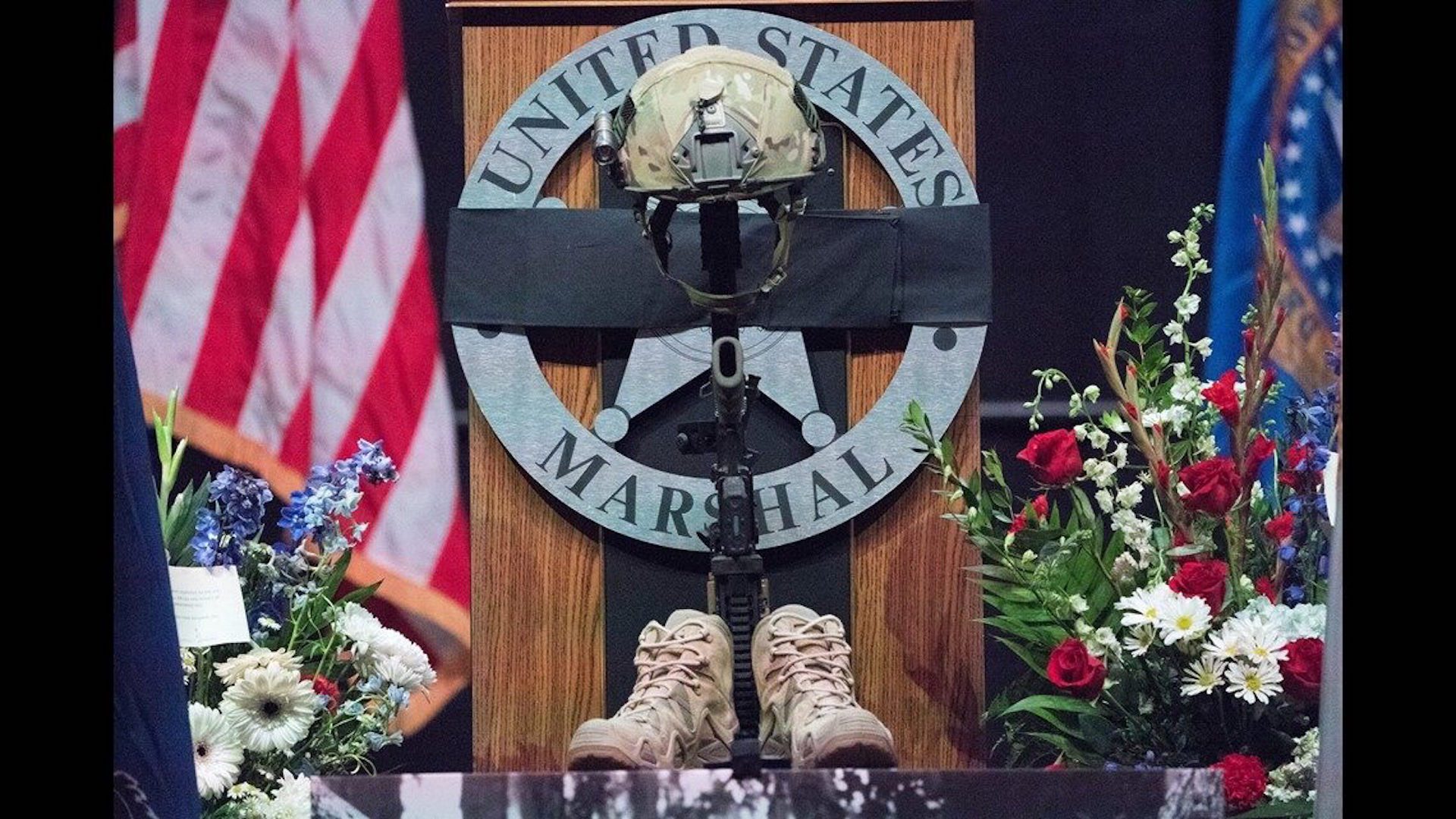 A military battlecross sits in the front of the stage at the Giant Center, in honor of Deputy U.S. Marshal Christopher Hill's military service. 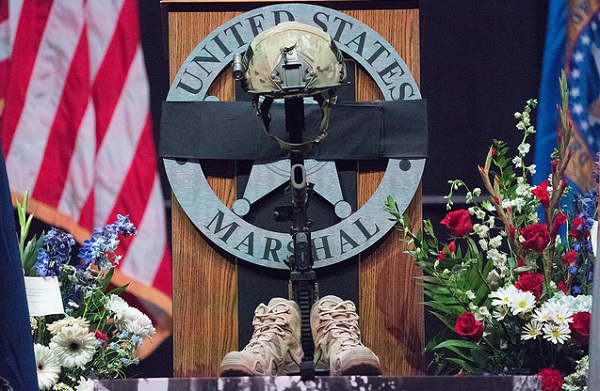 A military battlecross sits in the front of the stage at the Giant Center, in honor of Deputy U.S. Marshal Christopher Hill’s military service. (Photo courtesy of Shane T. McCoy / US Marshals)

What goes on behind the scenes in a newsroom is often boring and mundane. The public rarely knows about it.

But sometimes, it’s important to share with you how our decision-making process works.

The week of January 18th through the 25th is one of those moments: The shooting death of Deputy U.S. Marshal Christopher Hill.

Covering a tragedy, especially one as shocking as the murder of a law enforcement officer in the line-of-duty, is never easy.

But as the details began to emerge, we found ourselves with at least two personal connections to the incident. So, we held several in-house discussions on what we would and wouldn’t report at different times throughout the week.

As part of the Trusting News project, we hope to help you better understand how we arrive at editorial decisions by explaining how our conversations on coverage plans unfolded:

Should we be first to break the news of the identity of the marshal who was killed when we received this information from solid but non-official channels?

On the morning of January 18th, details were scarce on reports several police officers were injured in a Harrisburg neighborhood and that shots had been fired.

Hours later, PennLive confirmed a Deputy U.S. Marshal had been shot and killed.

Honestly, one of my first thoughts was whether one of my friends in law enforcement was on the team and if he was safe.

Within a couple of hours, the tragedy did hit close to home. One of our WITF colleagues learned who the fallen officer was before his identity became public. Since this person works outside our newsroom, let’s just say there was a connection through the York County community where the Deputy Marshal lived.

We didn’t consider for a second going public with what we had learned.

It was rock solid information, but it would not have been appropriate to break this kind of news. First, a family had lost a husband and father. While we figured the Marshals Service had made the appropriate notification, we were not going to take such a chance. Second, we learned about it through a personal connection to our organization and considered it off-the-record. There was nothing to be gained by rushing this information to the public.

What WITF did begin to do was include references to “York County” in our online stories.

Later in the afternoon, the Marshals Service announced 45-year-old Christopher Hill was shot by a man who was not even the target of the warrant being served by the Marshals task force in Allison Hill.

We learned he was married and the father of two. Hill was an 11-year veteran of the U.S. Marshals Service, who worked at the U.S. Capitol before transferring to Harrisburg in 2009.

He was considered among the “best of the best” — as a member of the elite U.S. Marshals Special Operations Group and a former U.S. Army Ranger. During the manhunt for Eric Frein — who was wanted for ambushing a state police barracks in Pike County, killing one trooper and wounding another — Hill was chosen to lead a large group that conducted woodland searches for the suspect that eventually led to his capture.

Do we break the identity of a another officer involved, who happens to be a friend of mine?

Later that night, I received a text I never expected from a friend: “I know you’ve been reporting on today’s shooting, but not sure if you knew ‘Cookie’ was involved. He’s OK.”

“Cookie” was that friend in law enforcement I mentioned earlier. We had played on the same line for a few years in a Harrisburg recreational hockey league and he is also the stepbrother of my old college roommate. A Harrisburg police officer, he was part of the team serving the warrant and had been hit by gunfire. Luckily, his ballistic vest kept him from being injured.

Again, I found myself with information that no other organization — to my knowledge — had.

We decided not to go public with it. First and foremost, I was a friend and not a journalist. I just didn’t feel comfortable using his name without having spoken with him.

I didn’t reach out to him for several days, because I knew he was dealing with a lot and didn’t want to seem like I was fishing for a story.  I simply wanted to make sure he was okay, and we exchanged texts briefly.

The next day, the City of Harrisburg’s Bureau of Police identified Officer Jeffrey Cook as having been involved in the incident and we reported it. 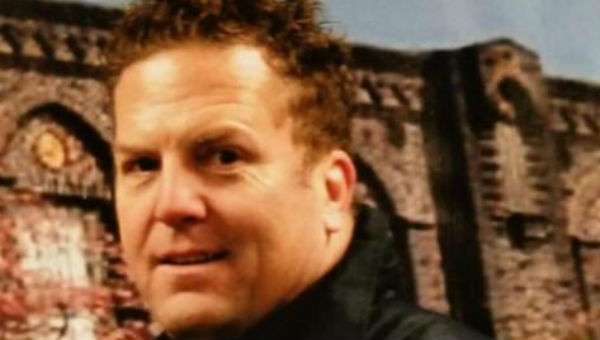 How do we cover the memorial service?

When details about a scheduled public memorial service for Hill at the Giant Center in Hershey were released, WITF began developing our coverage. We wanted to be respectful in our approach, while documenting a powerfully emotional moment for the community and law enforcement across the country. The 45-year-old was the first Deputy U.S. Marshal to be killed in the line-of-duty in Pennsylvania since 1851. To add to the gravity of the day, Deputy U.S. Attorney General Rod Rosenstein was slated to attend to pay tribute to the fallen officer.

I initially assigned three of our five reporters to attend.

But, those plans were put aside when the U.S. Marshals Service announced no journalists were going to be allowed inside the memorial, due to the wishes of the Hill family. Reporters would only be given restricted access outside the arena. The Marshals Service would provide photographs to media organizations of the service

We were going to have to adapt and reach another decision in a story that had been full of them.

Do I attend the memorial service as a private citizen?

As the day of the memorial service approached, we’re facing how to bring our listeners a story of a hero’s farewell — especially if the public could attend and journalists could not. Media organizations were asked not to talk to any of the guests.

This sparked several rounds of intense conversations between my boss, Cara Williams Fry, and Scott Blanchard, who is the editor of our StateImpact Pennsylvania project. The discussions focused on things like whether journalists could be stopped from attending a public memorial, if it would be appropriate to send in a reporter to observe and then simply describe the memorial, and other ways we could tell the story of how Christopher Hill was being remembered as a father, community member and a respected law enforcement agent who served his country to the best of his abilities.

Over the course of our back-and-forth, I decided I would attend and share my observations when the service was over. Basically, I would be interviewed by a WITF reporter and treated like anyone else who left the service and chose to share a story on Facebook or tell a friend about the service. There would be no audio or photos of what occurred inside the Giant Center and I would not write about it. Any conversations I had inside the memorial service would be off-the-record.

My gut feeling was 65-35 that this was the right decision. I felt like this was the proper approach in sharing how law enforcement remembered such a highly respected colleague, who lost his life while protecting his community. The downside was whether it was worth using my personal connection to justify discussing the experience.

The afternoon before the service, I went to talk with my neighbor. He’s in law enforcement and knows Officer Cook too. Our joke is all chats within our property lines are “off-the-record,” so I won’t share what was said — except that he figured I’d be there for Jeff. I was now maybe 55-45 on my coverage idea.

Once I arrived at the Giant Center parking lot, I found myself surrounded by police officers, detectives and other personnel from agencies across the country and Canada. It was a powerfully emotional scene. I had approached the door as a supportive friend and a person who cares about the community, who also happens to be a journalist. But, it just didn’t feel right. When I went inside, it was just as a friend and community member. 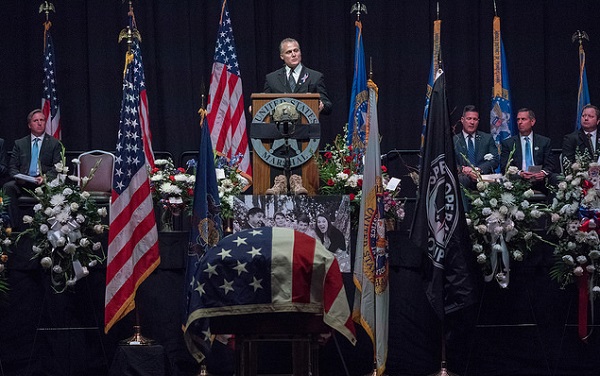 I ended up not sharing what I experienced inside the arena — the respect, the emotions, the traditions, the stories — with our reporters and in turn, with you.

What was most important was going inside to support Officer Cook as well as a grieving family that wanted a little bit of privacy to mourn and honor their loved one.

Christopher Hill was loved and respected. That was overwhelmingly clear.

His is a story worth telling. Maybe someday when the loss isn’t so raw, his colleagues will share their memories.

But, the bottom line is this:

Journalists wrestle with decisions like this a lot more than you might think and how we decide to handle our coverage isn’t a knee-jerk reaction.

I would have had a hard time explaining to you why we decided to break with the restrictions placed on journalists at the request of the family and report on the memorial.

I would have a harder time looking my friend in the eye.

He was also a husband and father.

It’s important to remember the people we cover are more than just the role they play in a story.

As journalists, we try to be thoughtful and weigh all sides of what the result of our actions could be.

We not only work in your community, we live here as well.

Our friends are here.

We get to know sources — some better than others — that are part of our coverage area.

We must remain objective to do our jobs, but that doesn’t mean we aren’t human too.