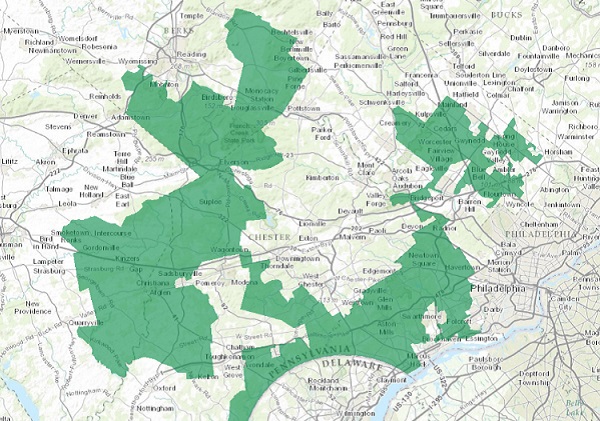 The justices, ruling just days after hearing oral arguments in the case, stated the map “clearly, plainly and palpably” violates the state constitution.

The order also says a new map will be in place by Feb. 19 to use for the primary election scheduled for May 15, according to the case docket.

State legislators are being given an opportunity to redraw the map, subject to the governor’s approval, and file it with the court by Feb. 15.

But if lawmakers can’t make it happen on time, the justices will choose a new map based on the court record. The decision invites “all parties and interveners” to submit their own proposed replacement maps by Feb. 15.

The order requires the new map to divide voters into districts that are contiguous and have equal populations, which federal law already required. But the districts also have to be compact and avoid dividing political jurisdictions (i.e., counties and municipalities) – considerations that aren’t legally mandated, but recognized as “best practice” in redistricting.

The justices were close to splitting along party lines, ruling 5-2 that the map is unconstitutional and 4-3 that state lawmakers enact a new one in time for the spring primary.

Chief Justice Thomas Saylor and Justice Sallie Mundy, both elected as Republicans, dissented on both points.

Saylor and Mundy both noted the state constitution empowers the legislature to handle redistricting. They also said the court should wait for guidance from the U.S. Supreme Court, where multiple similar cases — including a separate federal lawsuit from Pennsylvania— are pending. Mundy also criticized her colleagues’ order, the full text of which hasn’t been posted yet, as “vague.”

Democrat Max Baer filed a opinion that dissented, but only in part. Baer wrote he agrees the existing map is unconstitutional, but that any new map shouldn’t take effect until 2020. He says implementing one in time for the 2018 primary is forcing too compressed a timeline, as did Mundy and Saylor. The 2018 primary election also shouldn’t be delayed, Baer wrote, because “it has been tradition in Pennsylvania to hold a spring primary and fall general election.”

In the lawsuit, 18 registered Democrats — one for each of the state’s districts — claim the congressional map violates multiple parts of the state constitution, including its free expression clause, because it discriminates against them for their political viewpoint.

The case names Republican legislative leaders as defendants because the GOP controlled the General Assembly, and thus redistricting, the last two times it happened.

Senate Republicans’ chief counsel Drew Crompton says they’re “outraged” over the ruling and its “borderline unworkable” deadlines. They plan to seek a stay, encouraged by the U.S. Supreme Court recently granting one in a similar case out of North Carolina, Crompton said.

“This case was brought entirely under Pennsylvania law,” Gersh says.

Crompton says Republicans will be, in some respects, “flying blind” until they get the state court’s full opinion. But as of Monday afternoon, he held the position that the U.S. Supreme Court might have jurisdiction to issue a stay in the case because the federal constitution grants redistricting authority to the states, and Pennsylvania has put the legislature in charge.

“We have the power,” Crompton said. “And they have given us a few days to rewrite maps, or they will take the power.”

House Republicans hadn’t decided whether to join the effort to try for a stay, spokesman Steve Miskin said Monday afternoon.

Miskin says lawmakers need the additional guidance that would be in a full opinion. Estimates from lawyers involved with the case on when the complete decision is coming range between a few days and two weeks.

Apart from that, the new maps seem like they’d be problematic because they’ll be based on outdated information the last Census, Miskin said

“Who’s to stop somebody, once a map is approved, from filing a lawsuit … because you’re using 10-year-old data,” he said.

A “hyper-partisan decision by an activist judicial bench”

Mimi McKenzie also represents the plaintiffs and the League of Women Voters of Pennsylvania, who initiated the lawsuit before being dropped for lack of standing. In a conference call with reporters Monday, McKenzie referred to the map as “one of the worst gerrymanders in American history.”

During court proceedings, McKenzie’s team brought in political scientists who testified to the partisan tilt of the state’s map being a national outlier now and over the past several decades.

They also pointed to Republicans winning 13 of the state’s 18 congressional slots in all three elections since the map took effect, despite getting no more than 55 percent of the statewide vote tally in any of those contests.

“Really what they’re doing, is furthering a false narrative that Republicans win in this state because of the way we draw lines,” DiGiorgio said. “We believe we win elections because our candidates have better ideas, we recruit better candidates, they’re better funded. And that’s why Pennsylvanians elect Republicans to Congress all across the state.”

Editor’s note: This post has been updated to add information from the judges’ individual orders, including clarification on how the decision was split, and reporting from statehouse bureau chief Katie Meyer on Republican defendants’ next move and WHYY Keystone Crossroads reporter Lindsay Lazarski from an interview with plaintiffs’ lawyers.

Offering no evidence, Rep. Perry suggests ISIS might be tied to Vegas shooting