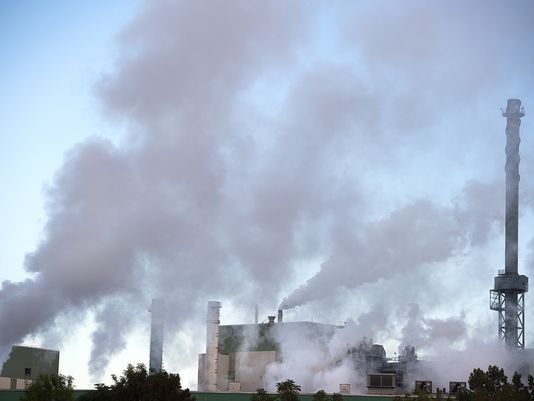 Glatfelter paper mill is among the top 1 percent of all industrial air polluters in the country. It has been cited for ‘significant violations’ two times in the past few years. (Photo: Jason Plotkin, York Daily Record)

People across much of York County woke up to a noxious odor this morning.

The smell is the result of an equipment malfunction at P.H. Glatfelter Paper Mill in Spring Grove.

“This morning Glatfelter experienced an equipment malfunction in a venting collection system,” company spokeswoman Eileen Beck said in a news release. “Although all standard operating procedures were correctly followed and the malfunction was corrected in a timely manner, it caused an unpleasant odor in the community surrounding our Spring Grove, PA facility.”

The company has not provided specific details on what chemicals were released.

Pennsylvania Department of Environmental Protection spokesman John Repetz says Glatfelter notified the agency of the release and will provide a report of what what was released and in what amount.

Columbia Gas spokesman Russ Bedell says the smell resulted in a flood of calls from customers fearing a gas leak in their homes. However, the smell has nothing to do with Columbia’s natural gas system.

York County spokesman Mark Walters urges people who fear they have a gas leak in their homes to call Columbia Gas in case their issue is separate from this one.

The Spring Grove paper mill has a history of violations with the DEP. A 2016 York Daily Record report shows that the plant is among the nation’s worst air polluters. DEP data shows the plant’s most recent air quality violation was on May 20, 2016, resulting in a $20,536 civil penalty. The plant has passed numerous inspections since then.