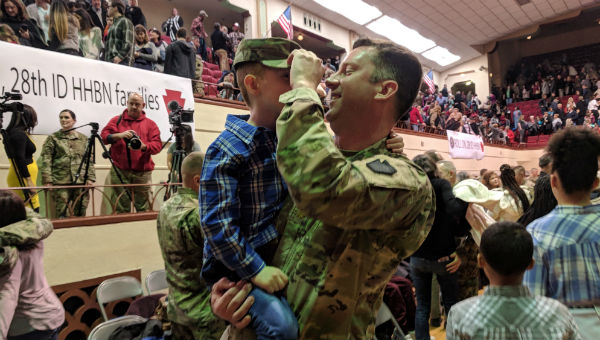 Maj. William Dunn, of Annville, places his hat on his son, Liam, after a farewell ceremony for the 28th Infantry Division Headquarters. (Photo: Rachel McDevitt/WITF)

WITF is part of your community. We’re your neighbors. We invest in this type of reporting because it’s vital to talk about life in our region, not about politics. Learn more about our involvement in the Trusting News project.”

(Harrisburg) — Five hundred Pennsylvania National Guard soldiers from a Harrisburg-based unit are deploying to the Middle East for the next year.

Families of the soldiers packed the Zembo Shine and put on a brave face at a farewell ceremony this weekend.

This is the 28th Infantry Division Headquarters’ first mobilization since the Korean Conflict, though many individual soldiers have deployed with other units within the 28th Infantry. Their mission is to support U.S. Central Command by coordinating troops and working with partner countries across the region.

This is the first overseas tour of duty for Major William Dunn, of Annville.

As he held his son Liam in his arms, he said he feels proud to go, but also melancholy.

“Obviously I’ll miss my friends and family back home, but I certainly appreciate their support while we’re going away,” Dunn said.

Sergeant Dave Zadzura of the Scranton area was surrounded by family and friends after the ceremony.

“I’m prepared for the mission, not prepared to say goodbye,” he said. “That’s the hardest part.”

Zadzura deployed once before, to Bosnia in 2003. But that was before he started his family. His kids are nine- and ten-years-old now.

“The first time I went I was single,” Zadzura said, “so it was kind of easy, you just picked up and went. My parents I had to say goodbye to, but this time it’s a little more difficult.”

Division leaders say those who join the National Guard shouldn’t exactly expect they’ll be deployed, but they say the old dynamic of Guard members as “weekend warriors” is changing.

The National Guard now makes up nearly 40 percent of the U.S. Army’s operational force. The command mission the 28th is taking over historically would have gone to a traditional active duty unit, but now Guard units have the same capabilities and they can get called up more often. 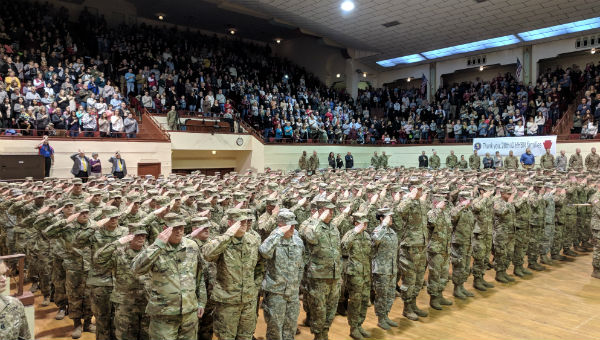 “I think as a military member, it [deployment] is something that you sign up for and that you’re always willing to do,” he said.

His father, also named Stephen, says he hoped his son wouldn’t have to go overseas.

“It’s kind of tough watching your first son be deployed for the first time, but we’re all in this together, and we’ll stick together and we’ll all get through it pretty well,” he said.

But Brynok’s mom, Lisa, says she’s concerned with what she called “mother’s worries,” like where he’ll be, and what he’s doing over the next year.

A tear slowly started to roll down Lisa Byrnok’s face, but she wiped it away.

Brynok’s wife Megan held back her emotions. They were just married last summer.

She says it feels weird this day is finally here, and she’s not sure when the full weight of her husband leaving will hit her. She plans to keep her mind occupied.

“Just keeping myself busy,” she said. “I work full time, and just trying to get involved in hobbies.”

She’ll also be planning their honeymoon–someplace far away from the Middle East.

My guns or my ganja? Firearm-owning pot fans in Pa. face a choice