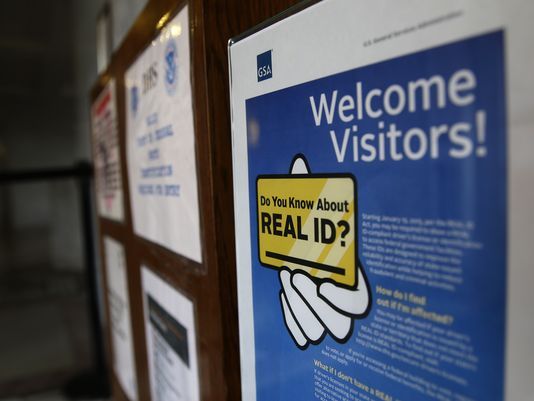 FILE – In this photo taken April 6, 2016, a sign at the federal courthouse in Tacoma, Wash., is shown to inform visitors of the federal government’s REAL ID act, which requires state driver’s licenses and ID cards to have security enhancements and be issued to people who can prove they’re legally in the United States. Lawmakers in Washington state are now trying to bring the state in compliance with the law, and if state-issued identification cards and licenses are not changed, residents may have to produce additional forms of ID when boarding domestic flights at U.S. airports beginning in January 2018. (Photo: Ted S. Warren, AP)

(Undated) — You might have heard that in the near future, your Pennsylvania license won’t cut it when you want to fly or enter a secure federal building.

You might have heard that Pennsylvania is coming out with a new license, and it’s going to cost twice as much as the old one.

You might have heard that there’s likely a lot of paperwork involved to get the new licence.

Here’s your quick primer to the confusing, evolving story of Real ID in Pennsylvania.

So what is REAL ID anyway?

The law set a deadline for state licenses to be REAL ID compliant. Past that deadline, the federal government says non-compliant state licenses won’t be accepted for a number of functions — such as boarding a domestic flight or entering secure federal buildings or military bases.

Opponents — including Allie Bohm, writing as an advocacy and policy strategist for the American Civil Liberties Union — have called it “a national database of drivers’ information” that turns “drivers’ licenses into national identification cards.”

She wrote that in 2012, when many states — including Pennsylvania — passed laws that barred the state from participating in the program. The states hoped that by banding together they could fight the federal mandate.

That didn’t work out.

Now deadlines are bearing down, and Pennsylvania has a plan to issue REAL ID compliant licences.

That means everything is fine now, and Pa.’s licenses are REAL ID’s?

After a 2017 state law passed, Pennsylvania now has a plan to issue licenses that comply with the federal mandate. But that law made the Real ID drivers’ license optional.

That means you can keep on renewing your regular license — no problem. But it won’t be a REAL ID.

Okay, so I have to opt-in to receive a REAL ID from Pa?

What does that entail?

Probably a lot of paperwork.

For those who have gotten their first Pennsylvania licence since September 2003, there’s good news: PennDOT likely has these documents on file for you already, but you’ll still need to verify that with the department.

But for those without the necessary original documents, PennDOT has a warning: It could take up to six months to obtain some, such as a duplicate birth certificate.

How much will it cost?

Again, you don’t have to pay to upgrade to REAL ID.

What are some dates I need to know?

Will my regular license still work if I don’t get a REAL ID?

Here’s some things you’ll definitely be able to continue using a regular Pennsylvania license for, according to the DHS: