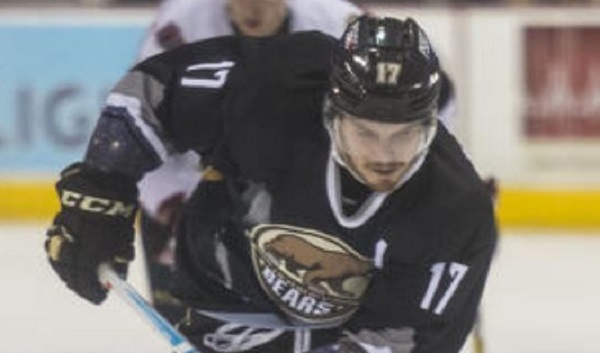 Chris Bourque of the Hershey Bears was named to the U.S. Men’s Olympic hockey team that will compete next month in South Korea.(Photo: Jeremy Long, Lebanon Daily News)

(Hershey) — USA Hockey and the Hershey Bears have announced forward Chris Bourque was named to the U.S. Men’s Olympic hockey team that will participate in the 2018 PyeongChang Winter Games next month in South Korea.

The 31-year-old has been a standout in the American Hockey League for years, and he gets this Olympic chance as these Games mark the first time since 1994 that active NHL players will not participate.

“This is obviously an unbelievable honor for myself and my family,” Bourque said in a statement released by the Bears. “It’s one of the biggest moments in not only my hockey career, but in my life. Playing in the Olympics — I don’t even know if it’s something you really dream about because it’s so far-fetched growing up as a kid, so to have the opportunity is something that I can’t even describe. It’s an honor to represent Team USA.”

A Boston, Massachusetts, native, Bourque is in his ninth season with the Hershey Bears. He’s the AHL’s career scoring leader among active players (678 points), won two league scoring titles (2012, 2016) and was named league MVP for the 2015-16 season. He’s played in 51 NHL games with the Washington Capitals, Pittsburgh Penguins and Boston Bruins.

“The entire Hershey Bears organization is thrilled for Chris Bourque,” Bears vice president of operations Bryan Helmer said in the release. “This is an incredible honor for Chris and something that he deserves.”

Bourque is part of Team USA’s 25-player roster that includes others from the AHL, plus college players and Americans playing professionally in Europe.

The Americans’ first game is a preliminary contest vs. Solvenia on Feb. 14. The gold medal game will be played Feb. 25.