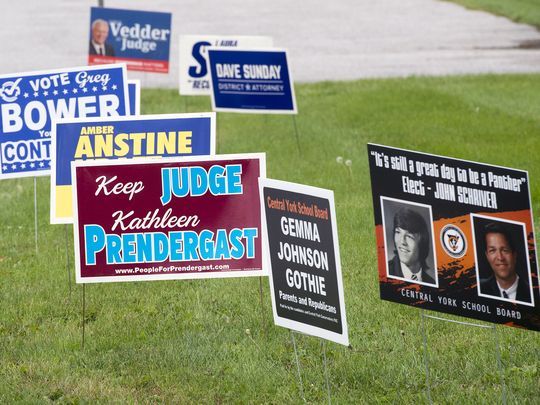 But a post-mortem report demanded by the Pennsylvania Department of State shed some light on how the mistake occurred and what might prevent it going forward.

The Department of State isn’t going to respond to the county’s report and self-assessment, nor comment on it, according to a spokeswoman.

But it did release the post-mortem report submitted last week by York County.

One challenge averted, but do others await?

As it turned out, there were 2,900 double votes cast in nine races. And, although officials initially claimed no races were affected, the numbers indicated it was, in fact, mathematically possible after all for one race to be impacted: West York Borough Council.

Four seats were up, and Councilwoman Shelley Metzler finished fifth. She might have secured fourth-place – and another term – if she’d received enough of the double votes cast for other candidates.

Normally, you can’t vote twice for a candidate on one ballot. But the programming error made it possible in 20 races in York – nine of which were contested – one month ago. One was countywide, for Court of Common Pleas judge, which is why tens of thousands of ballots could’ve been impacted.

Metzler told The York Dispatch that she was considering filing a challenge. If successful, that would’ve meant a special election (costs range from $5,000 to $186,000, depending, according to Pennsylvania Department of State data from 2003-16).

This particular election is no longer an issue, because a challenge was never filed by Metzler, who didn’t return calls inquiring about her decision.

But the county has been forced to re-examine its election administration process.

Officials listed ideas for improvement in a four-page response to the state – although it’s unclear whether those steps will fully address lingering compliance issues.

Officials say they intend to contract Dominion Voting Systems to help administer future elections, according to the county’s report and spokesman Mark Walters.

The county has declined to provide a cost estimate for engaging Dominion, which acquired Sequoia Voting Systems after York purchased its touch-screen machines from Sequoia in 2006 (the machines are expected to last no longer than 10 to 15 years, but the county’s been adamant that human error, not the machines’ age, is to blame for the confusion in November).

York also failed to follow state guidelines for testing voting machines before delivering them to precincts. The checklist includes simulating voting for cross-filed candidates (those who secure nominations for both major political parties during the primary and thus appear on both sides of the ballot).

Cross-filing – which appears to be relatively proliferate in Pennsylvania, judging from responses from experts at Ballotpedia and the Leauge of Women Voters – is where the problem occurred: when a voter selected a cross-filed candidate from one side of the ballot, the name remained on the other side instead of disappearing as it normally would.

Some voters reported becoming confused and hitting the name again, which counted as two votes and reduced the number of selections remaining. For example, in a race (like West York) where voters could select up to four candidates, such confusion would leave them with only two selections remaining instead of three as would be the case with a properly functioning ballot.

It is unclear why the county skipped the cross-filing simulation in its voting machine tests, which happen weeks in advance of Election Day. The report doesn’t address this question. An email from Walters attributed the oversight to “a breakdown with checks and balances,” although that was clear before the report was even compiled.

The cross-filing problem wasn’t known until Election Day when it was discovered by Nikki Suchanic, Director of York’s Department of Elections and Voter Registration.

Suchanic discovered it while fixing a separate, smaller-scale ballot mistake for a race involving one precinct, two candidates and four machines.

Suchanic and other county officials didn’t see an overnight fix for an error affecting hundreds of machines already delivered to precincts over 900 square miles.

They also didn’t want to widely publicize the problem because they feared prompting intentional – and illegal – double-voting, according to the county’s report to the state.

So they decided to post signs at each precinct warning voters about the problem and not to double vote. But some county residents later reported voting as late as 10 a.m., well past the end of peak poll traffic, without seeing any notifications that there was an issue.

The report attributes the flyering failure to shortcomings of rovers, who are county employees from various departments tasked with pitching in on Election Day. Officials say Suchanic will come up with a method for ensuring rovers carry out their duties as assigned.

York County hasn’t provided a copy of its election administration plan. But state law requires counties to prepare enough emergency paper ballots for 20 percent of registered voters in each precinct, and to have a strategy for quick restocking.

The law also provides for using emergency ballots if at least half of voting machines become “inoperable.”

Walters says last month’s scenario didn’t meet those legal thresholds, and the law – both statutes themselves and relevant caselaw – doesn’t address what constitutes an “inoperable” machine.

But election officials also try to avoid breaking out emergency ballots at all costs, taking preventative steps such as having extra machines and backup generators on hand, according to Forrest Lehman, who heads the Elections & Registration division in Lycoming County (larger and more sparsely populated than York) and sits on the County Commissioners Association of Pennsylvania’s elections committee.

Lehman says using scannable sheets can delay results in counties with electronic machines because they might only have access to one or two scantron machines – if any.

If York had used emergency ballots, they would’ve been tabulated by hand, Walters says.

As it was, the problem did prompt a manual recount and audit in York, which was completed within the week already afforded for dealing with provisional ballots and other anomalies before results are certified.

There were other counties that had problems on Election Day, althought the state only requested a follow-up report from York and Philadelphia.

Nearly 300 Westmoreland County residents over the age of 64 were disenfranchised due to the county’s mishandled attempts to correct noncompliant, but long-held, absentee voting procedures. The sole potentially impacted candidate isn’t  challenging results because he ended up winning.

Philadelphia’s ballots misstated the name of a statewide judicial candidate.

In Chester County, 163 voters were assigned to the wrong polling place, but ultimately were able to cast ballots, according to the state.

And although election outcomes aren’t in dispute in Lawrence County, the ban there on cell phones inside voting booths might prompt a lawsuit from the American Civil Liberties Union of Pennsylvania, according to deputy legal director Sara Rose.

Nearly half of states have fully or partly banned taking photos of ballots, citing concerns that the pictures could be used in vote-buying schemes, Rose says.

Some of these laws laws have been struck down in federal court, while others remain in place.

Editor’s note: This post was corrected to reflect that the state also requested a post-general election report this year from Philadelphia.

'Taps' in Glen Rock controversy over? Not so fast