‘Taps’ in Glen Rock controversy over? Not so fast 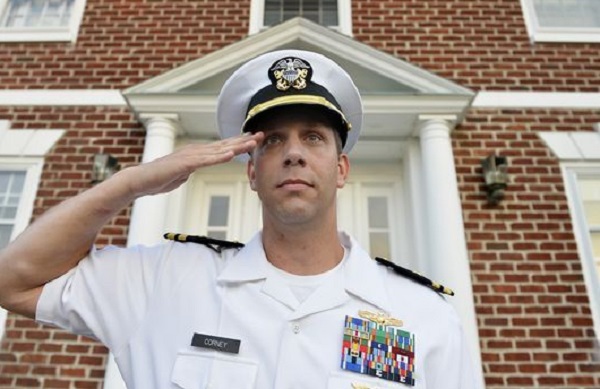 Joshua Corney stands for a portrait outside his Glen Rock home on Saturday, July 25, 2015. Corney, a lieutenant commander, is serving his 18th year in the U.S. Naval and recently moved his family to Glen Rock, where he grew up. Corney plays a recording of “Taps” outside his home every evening at 8 p.m. in remembrance of military service members, and plans to build a memorial for local veterans at the bottom of his driveway. (Photo: Chris Dunn, York Daily Record)

(Undated) — Just when Glen Rock residents thought the “Taps” issue was behind them, someone else has started playing the military song loudly in the borough.

U.S. Navy Lt. Cmdr. Joshua Corney said he first heard it on Friday – the same night he turned down his own amplified version for his own personal use.

After more than two years of disputes and legal battles, Corney said he agreed to lower the volume when Glen Rock Borough Council voted unanimously to authorize the playing of “Taps” through speakers at Glen Rock Park.

“The whole reason I turned it down was because I wanted to focus on getting the speakers put up at the park and build a memorial,” he said.

Corney said he now plays the song at 55 decibels, down from 85.

“You probably can’t even hear what I’m playing from the bottom of my driveway,” he said.

But the version someone else has been playing every night since Friday is much louder.

After the 57-second song finished, scattered applause could be heard from the front lawn of Joshua Corney’s property.

Glen Rock borough council president Doug Young said he hasn’t heard the song for himself, but he has heard an unconfirmed rumor that multiple people have started playing “Taps.”

As of Tuesday, he had not confirmed who they are or where they are playing from. He was not aware of any complaints from residents.

Corney said he has mixed feelings about others playing “Taps” in Glen Rock.

“I’m happy they’re doing what they feel is their constitutional right to do,” he said. “On the other side of the coin, it adds a bit more stress because now I’m having to deal with it again rather than getting the speakers at the park and building a memorial. It’s appreciated, but it’s also detracting from what I’m trying to do.”

Corney’s neighbor Scott Thomason, who received death threats recently after protesting Corney’s amplified volume of “Taps,” said he’s no longer bothered by the noise since Corney turned it down.

He has heard others playing “Taps” from multiple locations in the borough, but because it’s coming from so far away, it’s not too loud for him and his family, he said. However, he suspects the noise does bother neighbors who live closer to it.

“They can understand how it’s been for us the last couple of years,” Thomason said. “I’m in their position now. I’m not hearing it right in my ear every day, so I’m not as bothered.”