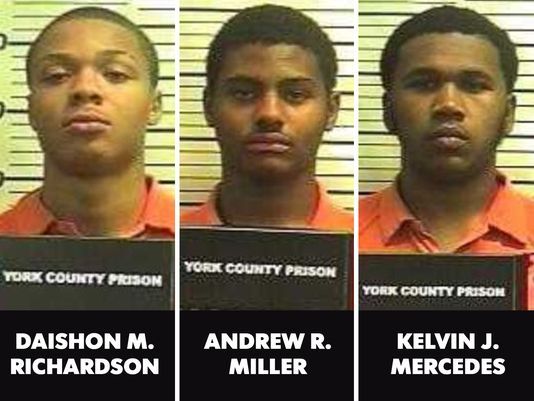 Three 16-year-old boys from Manchester Township have been charged with raping a 14-year-old girl at gunpoint after leaving the York Fair, according to court documents. (Photo: Submitted)

(York) — Central York School District has issued a new statement in relation to the arrest of three students who have been accused of raping a 14-year old girl outside of the York Fair.

“While we cannot share confidential student information, we can confirm that the three students charged have not been on school property and will not be present on school property until further notice,” Julie Randall Romig, director of communications and marketing for the district, wrote in an emailed statement Sunday.

Kelvin J. Mercedes of the 2500 block of North George Street, Andrew R. Miller of the 600 block of Norman Road, and Daishon M. Richardson of the 1000 block of Hearthridge Lane, all 16 years old, have been charged with rape – forcible compulsion, involuntary deviate sexual intercourse, unlawful restraint and terroristic threats.

All three were members of the Central York High School football team and are charged as adults. They were released on $25,000 bail each on Wednesday night after being arrested Tuesday.

District Judge Thomas Reilly, who presides over District Court 19-3-06, talks about the purpose of bail and some of the misconceptions about the topic in an interview. Dylan Segelbaum

Romig’s statement said that school counselors have been made available to students requesting support.

She wrote that the school district is working with law enforcement and has implemented “all appropriate measures to ensure the safety of our students, faculty and staff.”

Romig reiterated a statement made previously: The incident was non-school related and neither students, faculty or staff were in danger on school property.