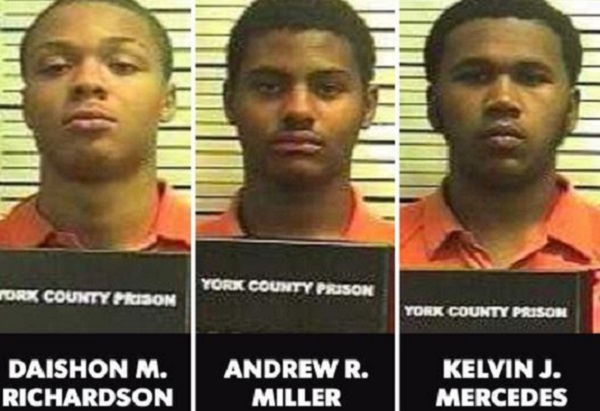 Three 16-year-old boys from Manchester Township have been charged with raping a 14-year-old girl at gunpoint after leaving the York Fair, according to court documents. (Photo: Submitted)

All three were members of the Central York High School football team and are charged as adults.

(West York) — Three 16-year-old boys from Manchester Township have been charged with raping a 14-year-old girl at gunpoint after leaving the York Fair, according to court documents.

Those arrests came at the end of a two-month investigation by the West York Police Department and the York County District Attorney’s Office.

Kelvin J. Mercedes of the 2500 block of North George Street, Andrew R. Miller of the 600 block of Norman Road, and Daishon M. Richardson of the 1000 block of Hearthridge Lane have been charged with rape – forcible compulsion, involuntary deviate sexual intercourse, unlawful restraint and terroristic threats.

All three were members of the Central York High School football team and are charged as adults.

West York Police Chief Matt Millsaps said two of the teens were picked up without incident Tuesday. The third made arrangements to surrender to authorities at the York County courthouse on Tuesday.

As of Wednesday afternoon, the three had posted $25,000 bail each, but were waiting at York County Prison to speak with probation on the conditions of their supervised bail. The three were released on Wednesday night.

In addition to being monitored after their release, Richardson, Miller and Mercedes are not allowed to have any contact with the victim, according to District Judge Jennifer J.P. Clancy’s office. A preliminary hearing on the case is scheduled before Clancy on Jan. 11, according to online court dockets.

Family members of the three declined to comment on Wednesday morning.

Julie Randall Romig, the director of communications for the school district, said Wednesday in an email, “Law enforcement officials have advised that this is a non-school related issue and, therefore, we do not have any comment on the ongoing police investigation.

“At no time were any students, faculty or staff in danger on school property as a result of this non-school related incident.”

When asked about whether the suspects will be in the general population when school resumes, school board president Eric Wolfgang said that it was a good question. He suggested talking with the superintendent.

Minutes after midnight on Sept. 17, West Manchester Township Police were called  to York Hospital for a report of a sexual assault, according to a search warrant filed by West York Police  at District Judge Jennifer J.P. Clancy’s office.

Once there, West Manchester Township Police spoke with the 14-year-old victim who said she was assaulted after leaving the fair, the warrant states. The attack occurred sometime between 9:30 p.m. and 11 p.m. on Sept. 16.

The victim “advised she was taken to unknown locations, where she was forced to perform oral sex on three males and then forced to have sexual intercourse with … them.”

The girl identified Miller and Mercedes by their first and last names and knew her third assailant only as “Daishon.” West Manchester Township Police established Richardson as the third suspect and determined the assaults occurred in the borough of West York, the warrant states.

West York Police took over the investigation after it was determined the rape happened in that jurisdiction. West Manchester Police have jurisdiction over the fairgrounds property.

Mendez interviewed the victim on Sept. 22.

She told police she went to the York Fair to meet up with friends, according to an affidavit of probable cause. While they were walking around, the three suspects followed behind them.

She said the boys told her they wanted to show her something and to follow them. They left the fairgrounds and eventually walked to a business parking lot across from an athletic field at a West York Area school. Mercedes allegedly put a gun to her head, told her to get on her knees and to perform a sex act.

She told investigators that she did what they told her to do because she was afraid she would be killed.

She was forced to perform oral sex on all three suspects, the affidavit states.

They then walked to an unknown yard that had a “well,” the victim told investigators. The suspects took turns holding her down and sexually assaulted her, the affidavit states.

Mendez said the “well” actually was a crumbling fire pit in a West York resident’s back yard.

The victim said that after the second round of sexual assaults, she was thrown roughly into a maroon SUV or van and was driven back to the fairgrounds. Mendez said investigators did not know who owned  the vehicle or who was driving.

Mendez said the girl then went home, told a relative what had happened and was taken to York Hospital for a forensic rape examination. Hospital staff contacted the police.

The victim told police the assault was photographed or videotaped. Mendez explained that the girl, while being assaulted, saw a light from a cellphone and thought one of the teens took a photo or a video.

Sometime later, the girl said she received a text picture from Miller showing him holding  the gun she said was used to threaten her.

Mendez said the teens’ cell phones were confiscated and examined. No video or pictures were recovered.

All three suspects were listed as juniors on the Central York varsity football roster on MaxPreps, a high school sports stats site. Richardson, listed as a wide receiver, had one catch for 5 yards, and Mercedes, a defensive end, had seven tackles. Miller, a lineman, had no stats.

Richardson and Mercedes played in the first three games of the Panthers’ season. Miller played in at least one of those games. MaxPreps shows no stats for any of the three after a Sept. 15 game against Hempfield.

Head football coach Josh Oswalt declined to comment Tuesday night. Calls to him on Wednesday were not immediately returned.

Mendez said that the teens were given the opportunity to speak with investigators prior to their arrests but that all three declined.

West York police obtained search warrants on Sept. 28 for the cell phones and several other items, including: buccal swabs, on which DNA cells are collected from the inner cheek; and any and all handguns, including a black-and-silver model with an extended clip, holsters and ammunition from Miller and Mercedes. Police did not seek a warrant for a handgun in regard to Richardson.

Mendez said the gun reportedly used in the rape has not been recovered but has been seen on social media sites since the assault.

Resources for victims of rape, violence

Victims of sexual assault who need immediate assistance may also contact the Pennsylvania Coalition Against Rape’s toll-free hotline at 1-888-772-7227.

Her sister's heroin overdose led her to be a health educator