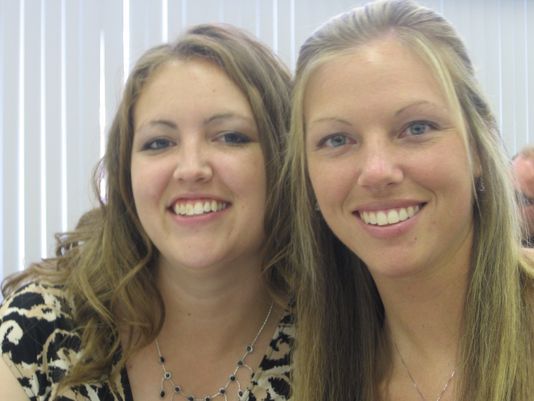 (York) — At the time of her sister’s death, Holly Herbert was working as a health educator at a hospital in Baltimore, teaching patients suffering from, say, diabetes or heart disease how to live with their affliction and how to change their lifestyle to combat the ravages of their diseases.

Her sister’s death changed everything.

Heather Myers was three years older than Holly. They were very different growing up. Heather was outgoing and funny. One of her parents’ favorite stories was about her first day of elementary school, the first time she rode the bus to school. When she returned home, they asked how her day went and she said, “It was OK, but it took forever for that bus to come back to get me.”

Holly stuck with sports, and that was her path through high school. Heather was more into music and art and eventually fell in with a bad crowd, drinking and experimenting with drugs. When she would get into trouble for it, she would tell her little sister, “Don’t do this.” She had some mental health issues; she was bi-polar and wasn’t diagnosed until she was in her mid-20s. By then, she was self-medicating and using drugs and alcohol to ease her pain.

She got clean and stayed that way for nearly eight years, working as a legal assistant and raising her son, Austin, as a single mom.

She struggled to stay clean. She was always open and honest about her mistakes, and she worked hard at recovering.

In the end, she couldn’t, the power of addiction was just too great to overcome. On July 27, 2015, she overdosed on heroin. The police tried to administer naloxone, but it was too late. On July 30, she was taken off a ventilator at York Hospital and died. She was 36. Her organs were donated.

After Heather’s death, her family found Not One More, the support group for families dealing with overdose deaths and addiction. It came about in a round-about way. A woman who knew Heather, a friend of hers from AA, worked for a company – Menasha Packaging in Emigsville – that wanted to do something, so it donated $500 to Not One More. Holly and her mother, Lynn Myers, were at the ceremony, held at a York Revolution game, when the company handed over the check.

When her sister died, Holly said, “I felt like a part of me died. I don’t know whether you can ever forget that. You just get used to it.” It’s something that’s always there, always in the background.

She learned from people at Not One More that the Susan Byrnes Health Education Center had an opening. She applied and got it. She wanted to work on the prevention side of things rather than waiting for someone’s health to go south and then become involved. She has a passion for it.

A good bit of her work involves drug education, a perspective that carries a lot of weight, considering what happened to her sister. When she tells Heather’s story, she said, kids pay attention. And lot of them, unfortunately, understand. More and more, kids are affected by addiction – either a parent or a sibling. They understand, but at the same time, they don’t. Addiction is difficult even for those who live through it to understand.

“People think we’re experts because we’ve been through this,” Holly said. “We aren’t. We’re trying to figure it out and trying to do what Heather would have wanted.”

And what Heather would have wanted was for her family, and her little sister, to be open about what happened, to help remove the stigma from mental health issues and addiction, to share her story with others so that it might help them. Heather had a lot of friends in recovery; she served as a sponsor for several. Her family believes she would have wanted them to continue her work, in whatever way they could.

For Holly, it’s sharing her sister’s story with kids, not as a morality tale, but as a cautionary tale, a tale with a grim conclusion and no easy way out. She talks about her sister’s struggles with mental health issues and her addiction. She tells them what a great person her sister was – a generous and loving person who cared about other people, even at the expense of her own happiness. She tells them her family was supportive and stable. It can happen to anybody, and anywhere – and it does.

“With a tragic death,” Holly said, “people don’t know what to say. Sometimes, they say nothing at all. But it’s helpful to talk about the person who died. It helps us and it can help other people. We can’t be afraid to talk about it, even it makes us upset or causes us to cry.”

Talking about Heather, and her life, and her death, keeps her alive.

“We don’t just talk about what happened to her. We talk about the good things,” Holly said. “She’s still with us in spirit.”