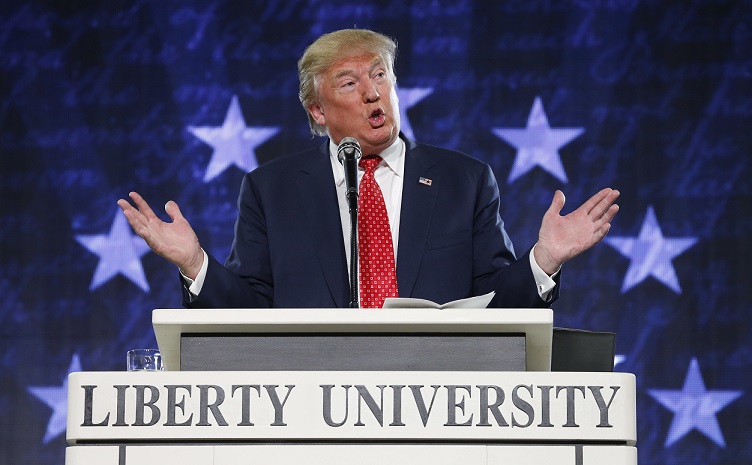 FILE – In this Jan. 18, 2016 file photo, Donald Trump gestures during a speech at Liberty University in Lynchburg, Va. President Donald Trump on Thursday, May 4, 2017, signed an executive order aimed at weakening the enforcement of a law that bars churches and tax-exempt groups from endorsing political candidates. Now Republican legislators hope to formally repeal the amendment as part of the tax overhaul making its way through the House and Senate. (AP Photo/Steve Helber, File)

When he was running for president, Donald Trump vowed to do away with the Johnson Amendment — and from the looks of the GOP tax plan, that could happen.

The GOP tax overhaul includes a plan to repeal the 1954 amendment, passed by then-U.S. Senator Lyndon B. Johnson, which bars nonprofits from supporting a political candidate.

Some evangelical churches have criticized the rule, pointing out that the First Amendment doesn’t allow Congress to pass laws limiting religious groups.

But churches are also nonprofits, meaning they don’t have to pay taxes.

Anne Gingerich is executive director of the Pennsylvania Associations of Nonprofits. She says, repealing the Johnson Amendment would turn charitable organizations into weapons for political parties. In doing so, it would make it harder for nonprofits to provide services that often go to those in need.

“The Johnson Amendment is important because it allows us to do our jobs in a neutral environment where people from both the Republican and Democratic Party can come together around common causes.”

Without the rule, people could get a tax write-off for making political contributions, since that money would technically be going to charity.

She says, such partisanship would erode the public’s trust in charitable organizations.