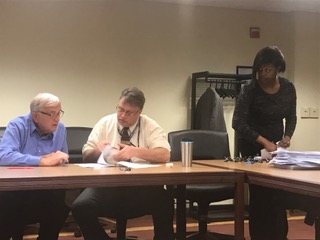 Nikki Suchanic (right), director of York County’s Department of Elections and Voter Registration, looks on as county Controller Robb Green (left) and Executive Director of Information Technology Tom Williams (right) pore over some of the 18,000-plus pages of codes that are the internal paper trail generated by electronic voting machines. (Emily Previti/WITF)

York County is hand-reviewing 59,000 ballots after a programming error caused the potential for double voting in 19 races, eight of which are contested.

Twenty-two county workers started the screening process Monday morning after being sworn in by the Board of Elections. They’re expected to finish by the end of the week, according to county spokesman Mark Walters.

Only one affected race is countywide, to elect three new judges to the York County Court of Common Pleas – but it only takes one to affect up to 59,000 ballots cast last week in York County could have at least one erroneous vote.

York bought its machines in 2006, which means they’re within the anticipated end of their 10-to-15-year lifetime. Walters says the county isn’t yet exploring replacement in anticipation of new state and federal requirements within the next year or so.

But he also says the machines “worked perfectly” last week, and attributes the issue to human error made while programming the machines.

The county starts the programming process four to six weeks before Election Day, according to Nikki Suchanic, director of the York County Department of Elections and Voter Registration.

The process takes about three days and entails a test run, during which the error was not caught. After programming and testing, machines are delivered (which takes about two weeks) and remained sealed unitl the day before the election.

Suchanic says she didn’t discover the problem until she was called to Glen Rock to fix part of the ballot specific to the 2,000-person borough. A two-year council seat was incorrectly listed as a single year term. This isssue could be addressed by reprogramming just four machines at the municpality’s sole polling location.

But while fixing that problem, Suchanic identified the wider-reaching one affecting all 620 machines at 159 locations throughout the 900-square-mile county – and prompted the recount now underway.

And there wasn’t time for that, let alone certfiying and printing paper ballots, Walters says.

So instead, the county posted signs at polling places. But at some places, that didn’t happen until hours after voting started – and even then, some people were still confused, according to those who complained at Monday’s election board meeting.

The elections impacted were those with multiple openings for the same office, for which at least one candidate had cross-filed, meaning their name appears as a Democrat and a Republican.

Four seats were up on West York Borough Council, for example, so voters select up to four names.
Councilman Brian Wilson, who was cross-filed for his re-election, explains what happened when he voted.

“I saw my name at both spots, figured, eh, it’s cross-filed. As soon as I hit my Democrat name, it didn’t disappear like it normally should,” Wilson said. “So I went ahead and hit it again, and it registered to vote. Then I went ahead and voted two others.”

If the machine had been working properly, Wilson’s name would’ve disappeared the first time he selected it from one party’s side. Then he could have voted for another three people, or four total.

“That second vote could’ve easily gone to another candidate. And we will never know who that vote would’ve gone to, we will never know the integrity of that vote, because of this machine issue. It will change vote totals,” Baker said. “Especially in some of the boroughs and municipal races that are contested, if could change the outcome, the second vote for a candidate, had that gone to a different candidate.”

Each number corresonds to a different choice (unknown to workers doing the review, Walters says) made by a voter. If a number appears twice in the same block of code, that signifies someone voted twice for the same candidate in the same race.

Anyone who wants to contest the election has to file through Commonwealth Court, and if they prevail, the county could be ordered to hold a special election.

Acting Secretary of State Robert Torres has requested a review and report by Nov. 27 from York County detailing how the mistake happened, and was mitigated, and the county’s plan to prevent similar issues in the future, according to a letter provided by the state.

Editor’s note: This post was updated to clarify the timing and nature of the incident report requested by the state.