Two weeks in, Cedar Haven strikers are prepared for Christmas 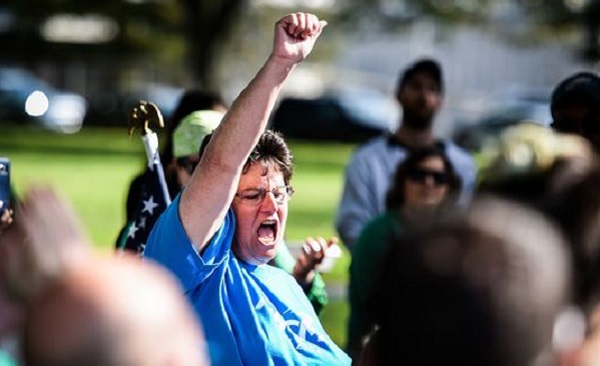 Penny Kleinfelter, president of the ASFCME Local 2732, cheers Cedar Haven Nursing Home employees of AFSCME Local 2732 held a rally along with members of the Pennsylvania AFL-CIO other unions outside of Cedar Haven on Friday, Oct. 27, 2017. The employees went on strike last week, on Oct. 20, 2017. (Photo: Jeremy Long, Lebanon Daily News)

(Lebanon) — A labor dispute at Cedar Haven shows no signs of abating two weeks after nurses went on strike.

If you need proof, consider this: AFSCME Local 2732 President Penny Kleinfelter has placed an artificial Christmas tree along the Fifth Avenue picket line in preparation for the holiday season.

Kleinfelter said she isn’t trying to send a message – she’s just decorating, since she usually puts up her Christmas tree at home at the beginning of November. But she hopes Cedar Haven ownership understands the strikers are “in it for the long haul.”

Some union members have applied for unemployment compensation, and the union is defending their claim on the basis that they went on strike to protest an unfair labor practice, said AFSCME council director Steve Mullen. The union has maintained that owner Stone Barn Holdings bargained in bad faith by implementing a new contract even though it was voted down by union members and while negotiations were still ongoing.

Union members have also pooled resources to help other union members who are facing a financial crunch from not receiving paychecks during the strike. Kleinfelter said one union member with “many” children needed money for groceries, so Kleinfelter asked fellow strikers to bring a non-perishable food item for her the next day.

“When she pulled up in her car, and we were pointing at this pile of groceries, she started crying, because she was overwhelmed. We filled her entire trunk and the entire back seat, plus had $50 in cash and a $25 grocery gift card,” she said.

Stone Barn Holdings is also showing no signs of flinching. 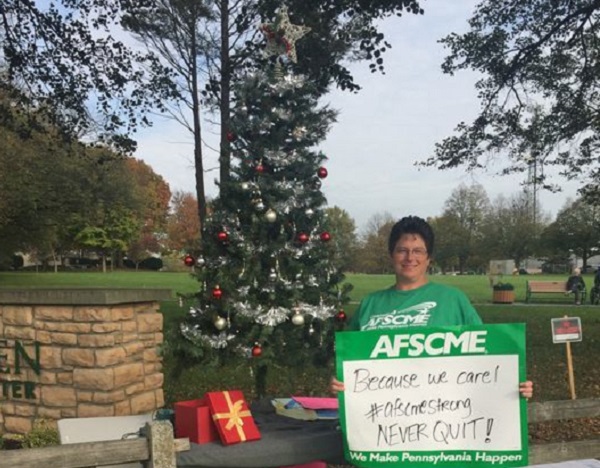 AFSCME Local 2732 President Penny Kleinfelter placed this Christmas tree along the Fifth Avenue picket line for Cedar Haven nurses. Many of the nurses wrote their names on decorations on the tree. The strike entered its third week on Friday afternoon. (Photo: By Daniel Walmer)

Chas Blalack, a principal owner in Stone Barn Holdings, did not respond to a request for comment for this story. However, Mullen said Blalack has not yet shown a willingness to negotiate despite attempts by a federal mediator to encourage negotiations.

“The employer conditioned sitting down and negotiating with us on us calling off the strike, returning to work, and accepting the terms and conditions that we came out here (to fight),” Mullen said.

At issue in the strike is a contract that would substantially increase health insurance costs for employees and decrease paid time off to as few as five days per year.

This story comes to us through a partnership between WITF and The Lebanon Daily News.