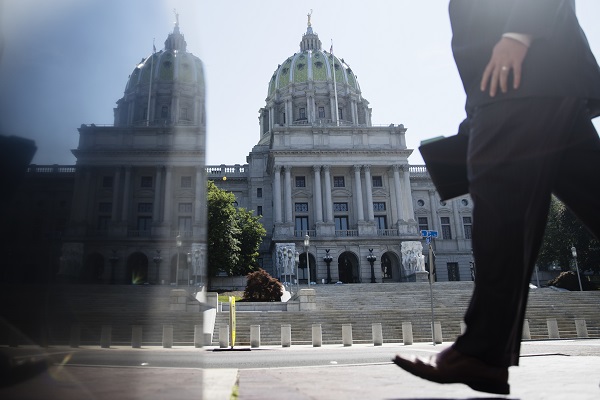 (Harrisburg) — Pennsylvania’s deficit-riddled finances are in new territory, as Democratic Gov. Tom Wolf assembles a package to balance the state’s budget without involvement from a Republican-controlled Legislature riven by ideological and provincial disputes.

Three-and-a-half months into the state’s fiscal year, Wolf has bypassed a Legislature that hasn’t sorted out a way to finance a nearly $32 billion budget bill it passed June 30. Instead, he is working on a $2.2 billion budget-balancing strategy that relies heavily on borrowing to get the state through the year.

The state’s fiscal problems are tall. It suffered the biggest cash shortfall since the recession, compounding an entrenched post-recession deficit.

Borrowing may make it worse: public finance analysts generally regard borrowing to pay operating costs as bad fiscal practice and a last resort.

For now, the state is relying on a Pennsylvania Treasury credit line to make on-time payments through Friday. Wolf’s administration is discussing more such agreements with the Treasury Department to ensure it can make on-time payments in the coming weeks, including a $1.2 billion aid payment due Oct. 26 to public schools.

On Friday, Wolf’s administration issued a request-for-proposals for what it calls a “lease/leaseback” of the Pennsylvania Farm Show Complex in hopes of raising $200 million that it would repay over 29 years, with interest.

It is also working with the Pennsylvania Liquor Control Board to borrow $1.25 billion, to be repaid over 20 years by revenues from the state-controlled wine and liquor system.

Separately, Wolf’s administration hopes to borrow $165 million to subsidize grant programs that are normally paid for by general tax collections; find roughly $200 million in savings; and come up with another $250 million by tapping unspecified off-budget programs or borrowing against future revenues.

The House and Senate each return to session Monday, but Wolf’s unilateral move to balance the budget threw yet another curveball into a process that has been unpredictable. Top lawmakers had assembled an evolving, albeit complicated revenue package, but it’s no longer clear whether that framework is viable or necessary.

That plan relied primarily on borrowing, siphoning cash from off-budget programs and authorizing a big expansion of casino-style gambling in Pennsylvania in a quest for millions more dollars from license fees and taxes on gambling losses.

It stalled when the House balked at raising taxes, a key demand by Wolf that had won Senate support as a way to help fix the deficit.

Rep. Gene DiGirolamo, R-Bucks, said he is working on a measure to impose a tax on Marcellus Shale natural gas production that can pass both chambers and get Wolf’s signature, despite opposition from House Republican leaders.

The tax is a top Wolf priority. The Senate approved a version of the tax in late July, albeit at a lower rate than what many House supporters are seeking.

The fight took on bare-knuckled political tones when Scott Wagner, a Republican state senator running for governor, told a crowd last month that he had urged the House Appropriations Committee chairman to block a Marcellus Shale tax to hurt Wolf’s re-election chances.

Penn State, the University of Pittsburgh, Temple and Lincoln universities and the University of Pennsylvania’s veterinary school are awaiting legislation allowing nearly $600 million in aid that is stalled in the House without the money to pay for it. The Legislature also has not yet authorized another $52 million for Penn State’s agricultural research and extension programs.

Penn State and Pitt alone say they use the aid to extend some $760 million a year in tuition discounts for in-state students, while Penn’s veterinary school, the state’s only such school, says it has trained better than two-thirds of Pennsylvania’s veterinarians.

Pennsylvania’s ugly budget fight is being noticed beyond the state’s borders. Last month, the credit rating agency Standard and Poor’s lowered its rating on Pennsylvania’s debt, citing the state’s reliance on one-time cash infusions to pay its bills. That will raise borrowing costs for the state, as well as school districts and local governments, Wolf says.

Now, an analysis by Moody’s Analytics of metro areas that are good fits for Amazon’s huge second headquarters questioned whether Pennsylvania’s budget troubles will make it unwilling or unable to offer the generous financial incentives that Amazon will want.
___
Follow Marc Levy on Twitter.

Public school student-athletes have a right to take a knee