Public school student-athletes have a right to take a knee 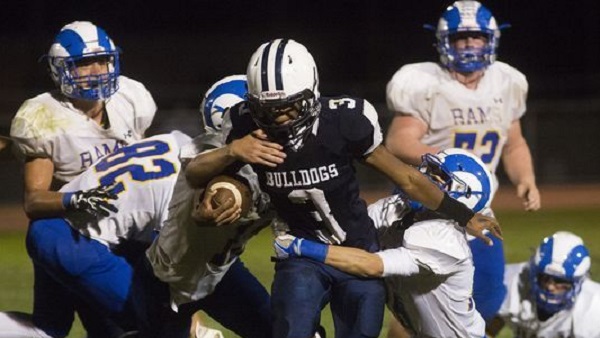 Today, a silent protest could involve a public high school student taking a knee during the national anthem.

Like it or not, both actions in a public school are protected by the U.S. Constitution and a student’s First Amendment rights, a school solicitor confirmed.

At Tuesday’s West York school board meeting, board vice president Todd Gettys explained that West York football players considered taking a knee during the national anthem this season. He addressed changing the student code of conduct to prohibit similar protests.

The board did not take action after discussing the issue with West York solicitor Jeffrey Litts.

“The courts have held repeatedly that public school students can’t be compelled to stand for the Pledge of Allegiance without violating their First Amendment rights,” Litts said when reached at his office with Kegel, Kelin, Almy & Lord LLP Thursday. “That same legal principle would apply if public school students elected to take a knee or otherwise engage in silent protest during the national anthem.

“I believe the First Amendment would protect a student in that type of situation.”

The U.S. Supreme Court ruled in Tinker vs. Des Moines Independent Community School District in 1969 that students and teachers do not “shed their constitutional rights to freedom of speech or expression at the schoolhouse gate.”

Justice Abe Fortas went on to note in the majority decision, “to justify prohibition of a particular expression of opinion, it must be able to show that its action was caused by something more than a mere desire to avoid the discomfort and unpleasantness that always accompany an unpopular viewpoint.”

Litts was the editor in chief of the Pennsylvania School Law Handbook, and his firm serves 23 schools in Berks, Chester, Dauphin, Lancaster, Lebanon and York counties.

“The First Amendment applies to pubic schools because they are created, sponsored and run by elected officials,” Litts said. “Because public schools are public, they need to comply with the First Amendment and therefore they cannot abridge free speech rights of students unless the students conduct would substantially disrupt the school.”

On Thursday night, in a phone interview, Gettys explained he brought up the subject with the hopes of having a larger discussion on reviewing the school’s conduct policy. He pointed out West York extracurricular activities have great community support, and he feared that could erode if students don’t remain respectful.

“I’m all for students’ rights and expressing themselves, but they need to know when you express yourself there can be consequences,” Gettys said.

“I just want students to understand the impact of their decisions.”

“It’s just a really thin line, wondering if I should speak up for the greater good, or should I just think about trying to go out there and play and maybe try to go somewhere for college?” Johnson told GameTimePA in September 2016.

A Northeastern cheerleader did take a knee during the national anthem at varsity basketball games last season.

The YAIAA and PIAA do not have regulations on observing the anthem.

The PIAA stipulates only that event hosts display the flag and play the national anthem.

“It is important to us,” PIAA associate executive director Melissa Mertz said about the anthem. “But we don’t get involved in how coaches, players and spectators handle the anthem.”

A trickle-down effect from professional sports sometimes arrives at the high school level, Mertz said. When former San Francisco 49ers quarterback Colin Kaepernick refused to stand for the anthem in 2016, it started a national conversation.

It has remained a hot-button topic since President Donald Trump said last month that NFL team owners should have suspended Kaepernick.

Public schools, however, are different from private institutions and private schools.

It’s also not as simple as coaches being told to discipline players for kneeling during the anthem.

“When we talk about students’ constitutional rights and potentially how they might be violated and who might be responsible if violated, it could be individuals, coaches, teachers, school board members and the school board itself,” Litts said.

This story is part of a partnership between WITF and York Daily Record.

'All those years of wondering'