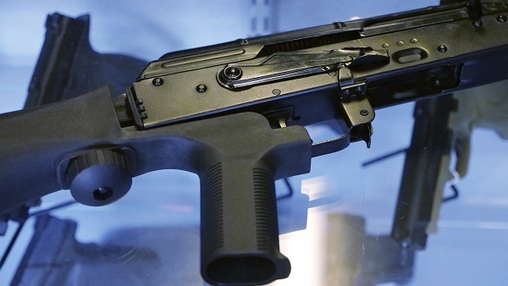 In this Oct. 4, 2017, photo, a device called a “bump stock” is attached to a semi-automatic rifle at the Gun Vault store and shooting range in South Jordan, Utah. (AP Photo/Rick Bowmer)

(Harrisburg) — In the wake of the shooting in Las Vegas that killed 58 people and injured over 500, some lawmakers in Pennsylvania are pushing legislation that would ban certain gun modifications.

When gunman Stephen Paddock opened fire on a crowd of concert-goers, he used a device called a bump stock to functionally turn his semi-automatic weapon into a deadlier automatic one.

Bump stocks are currently legal — even though automatic weapons are only legal with a special license. Lehigh County Republican Senator Pat Browne is sponsoring statewide legislation to change that.

Similar bills are also in the works on the federal level, and Browne said passing a nationwide ban would be preferable. But he said he’s concerned Congress and the US Senate will only end up regulating bump stocks, instead of banning them outright.

Shira Goodman, with gun-control group Ceasefire PA, said there are deeper issues at play than bump stocks, though.

“We really need to be looking at a much broader discussion about how people get guns, who gets guns, [and] what kind of guns they get,” she said.

“It’s really important to stay focused, because if we do that, we have the opportunity to get something done,” he said. “Once it goes beyond that, a lot of times it becomes a lot more difficult to achieve progress.”