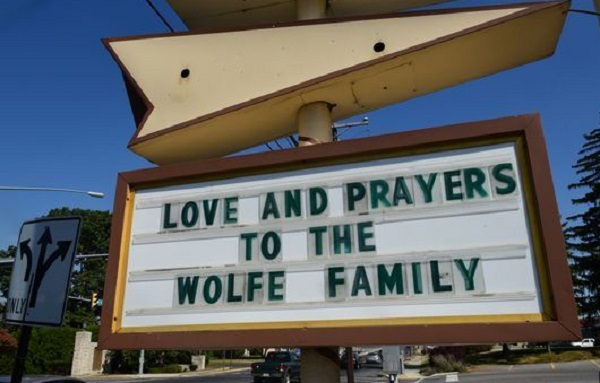 A sign at Greyhound Family Restaurant, Shippensburg, recognizes the Wolfe family on Tuesday, October 3, 2017. Bill Wolfe Jr., of Shippensburg, was a victim of the mass shooting in Las Vegas on Sunday that left over 50 people dead. (Photo: Markell DeLoatch, Public Opinion)

(Shippensburg) — Shippensburg lost one of its own on Sunday in a tragedy 2,000 miles away.

Bill Wolfe Jr., a local youth baseball and wrestling coach, was among 59 people killed at an outdoor concert in Las Vegas.

People back home looked for a connection. Their families and friends had children on teams that were coached by Wolfe or that played against his team.

They tried to cope with their anguish over what has been called America’s deadliest mass shooting.

Gloria Beecher of Shippensburg ate only part of her lunch at the Greyhound Family Restaurant on Molly Pitcher Highway. Her grandchildren knew the coach. She tried to explain her feelings.

Bill Wolfe Jr. and his wife Robyn were celebrating their 20th anniversary at a Jason Aldean concert. Wolfe died as a result of the mass shooting that occurred during the concert. (Photo: Submitted)

“A lot of things have happened in this world,” Beecher said. “It wasn’t because it was Bill Wolfe. It was just the fact that it did something to me.  I was a nervous wreck all day (Monday). It took me till last night to settle down. I had to stop watching the news.  I don’t want to change anything, but I do think some things have to change. Things to prevent these things.”

Beecher was eating lunch with Helen Jett of Shippensburg.

“It’s devastating,” Jett said. “You don’t turn on the TV or go to Facebook. You have to turn it off.”

Jett attended the candlelight vigil for Wolfe on Monday as the community waited to hear his fate.

“In Shippensburg everybody comes together,” Jett said.

Local residents also said they realized that Shippensburg is not immune to tragedy.

Perry had checked with a Wolfe family friend on Tuesday to make sure the restaurant’s sign “Love and prayers to the Wolfe family” would not be objectionable.

“I can only imagine if it was my own husband or brother, my son’s coach,” Perry said. “It’s terrible.”

Wolfe and his wife, Robyn, were in Las Vegas celebrating 20 years of marriage.

“They’re supposed to be out there enjoying the concert,” said Cheryl Macak, pausing from her lunch. “It breaks my heart.”

After moving from Altoona 28 years ago, Macak found Newburg to be “a nice town to bring kids up in.”

“My younger grandson goes to concerts all the time,” she said. “It worries me. You can’t live in fear. You have to go on and hope for the best.”

Gloria Beecher, left, and Helen Jett dine at Greyhound Family Restaurant on Tuesday, October 3, 2017. The two ladies talked about Bill Wolfe Jr., of Shippensburg, who was a victim of the mass shooting in Las Vegas on Sunday that left over 50 people dead. (Photo: Markell DeLoatch, Public Opinion)

Beecher said she still plans to go to an indoor Mariah Carey concert next July in Washington, D.C., but hopes organizers will have checkpoints or security scanning “so people can feel safe.”

“It’s going to take a while to get over this,” Beecher said.

In time, the nation should look at changing its laws on semi-automatic weapons, she said.

Patrons at the Shippensburg restaurant generally agreed that there was more to the mass shooting than is being reported in the media.

“The blood was not dry on the floor yet, and they said it was not a terrorist,” said Albert Barrick of Newville. “How do they know that? He had it planned out. The news media says it was spur of the moment. I don’t believe that.”

“You just have to be aware of your surroundings more,” said his wife, Vonnie. “You live each day and have to be ready to go home and meet your maker.”

This article is part of a content-sharing partnership between WITF and Public Opinion Online.