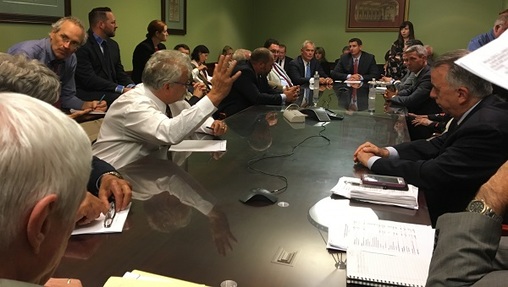 House Democrats and Republicans held an intense Rules Committee hearing on the bill before sending it to the full floor. It saw several more hours of debate there. (Photo by Katie Meyer/WITF)

(Harrisburg) — The state House of Representatives has narrowly voted to move a budget plan built largely on one-time fund transfers.

Although it represents the first action on the overdue budget in well over a month, it’s unclear how much it’ll move the needle toward a resolution.

The Senate and the administration of Governor Tom Wolf both support a very different plan that raises several taxes–something the House majority wants to avoid completely.

House Democrats, like Minority Leader Frank Dermody, insist there needs to be more recurring revenue to balance the structural deficit (a budget shortfall that recurs year after year due to underfunding).

“There is no free lunch,” Dermody told his GOP colleagues in a committee meeting. “There’s no way out of this with smoke and mirrors, double-counting revenue and not coming up with real revenue. That can’t be done anymore.”

Most House Republicans are essentially saying that there is no structural deficit at all–just a shortfall left over from last year’s low revenues, plus several hundred million more dollars that can be plugged with one-time sources.

Many, like House Speaker Mike Turzai, pin the size of the shortfall on the governor.

“There was an inflated revenue estimate,” he said. “The governor also had a responsibility to hold off on spending when the revenues weren’t coming in–it was completely irresponsible for this governor to continue to spend money.”

The idea that there is no structural problem conflicts with the Independent Fiscal Office’s assessment.

The office has calculated that about $1.5 billion dollars of the $2.2 billion budget gap comes from last year’s shortfall. That’s a one-time sum that could be paid off with one-time revenues.

But IFO Director Matthew Knittel said that leaves around $750 million dollars to be filled in–and noted, if lawmakers patch it with non-recurring money this year, it’ll still be there next year.

“If revenues come in as projected, we will have that $750 million gap sitting there,” he said.

House GOP Spokesman Steve Miskin said as it stands now, the House bill doesn’t create any revenue that would return year over year.

It does include general estimates for a few hundred million dollars in gambling and liquor industry expansions–which have the potential to create new cash flow. But those will depend on what the House, Senate, and administration can agree on.

House leaders said they’ll be able to get a billion dollars up front by monetizing the state’s Tobacco Settlement fund, which currently pays for anti-smoking programs.

Around $600 million is being pulled from the state’s off-budget funds–a concept introduced by conservative members, who say the transfers wouldn’t impact any state programs.

“No I think they will affect programs,” Harper said. “I think they will make less money available for things that my constituents care about, like the environment and mass transit and transportation projects. I don’t think this is a good budget for my district.”

The rest of the money comes from lapsed general budget funds and a transfer from the Joint Underwriting Association–a group that sued the state when it tried to take that same money last year.

When the bill finally passed after hours of debate, it was close.

No Democrat supported it. 103 Republicans voted yes–just one more than the minimum number needed.

15 Republicans left the party line to vote no. Most were moderates from the southeast part of the state, like Bucks County’s Gene DiGirolamo

“I mean ok, the tobacco thing, you want to call it borrowing–I don’t like it, but it’s something I could live with as part of an overall plan that had Marcellus Shale in there, and maybe a few other things,” he said. “But I don’t see them in there.”

In a statement, Senate Majority Leader Jake Corman said his chamber has to review the bill.

A spokesman for Governor Tom Wolf said the House plan isn’t sufficient to “solve the structural deficit and avoid a credit downgrade.”

A potential downgrade isn’t the only fiscal problem looming.

The commonwealth’s general fund is on track to run dry on Friday, because Treasurer Joe Torsella has refused to extend a customary line of credit to cover short-term expenses. He argues that with the budget unbalanced, it would be irresponsible.

“I don’t know of a precedent where there’s been extended long-term lending by Treasury into a situation where everyone acknowledges, at the beginning of the fiscal year, that the budget is $2.2 billion out of balance,” Torsella said.

Wolf hasn’t said what he’ll do about large bills that are coming due.