House is back to work on budget, but the way forward remains murky 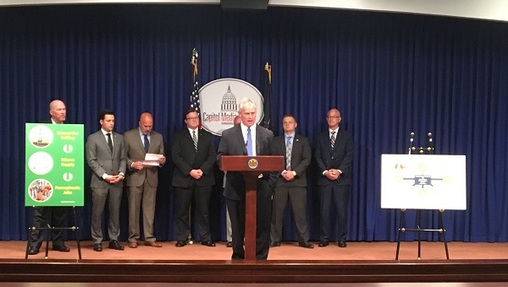 House Speaker Mike Turzai speaks in opposition to a natural gas severance tax–one of the major components of a budget funding plan that is supported by every caucus but his own. (Photo by AP)

(Harrisburg) — After weeks of deserted Capitol hallways and quiet meetings between House members, the chamber is officially back in session–well over a month after the Senate passed a bipartisan revenue plan to balance the budget.

It’s now the House’s turn to make a move, but it remains unclear what that will be.

House Majority Leader Dave Reed confirmed the chamber is taking up a controversial revenue proposal from an anti-tax bloc of the House GOP.

It’s designed to fill budget gaps by raiding special state funds. House GOP spokesman Steve Miskin said it will likely get a vote in the full House this week, but it’s unclear if it will pass.

House Speaker Mike Turzai is one of the chamber’s most prominent, powerful opponents of new taxes.

Before session began, he spoke at a press conference against a severance tax on natural gas–one of the key components of the plan favored by the Senate, Governor Tom Wolf, and House Democrats.

When reporters attempted to ask him questions about the budget following the conference, he refused to answer.

A staffer for Turzai said House leaders currently plan to keep members in session until they pass something, which might mean working through the weekend.

Meanwhile, protesters are swarming the Capitol to demand lawmakers finish funding the budget that was due at the end of June.

Marc Stier, of the left-leaning Pennsylvania Budget and Policy Center, took aim at Turzai in particular.

“He’s just out there with a small group of ideologues who pretend we can solve this without some kind of tax increase,” Stier said.

The House lawmakers who remain opposed to taxes have said that they won’t vote for an increase until all other revenue sources are exhausted.