Was that funnel cloud in York County a tornado? 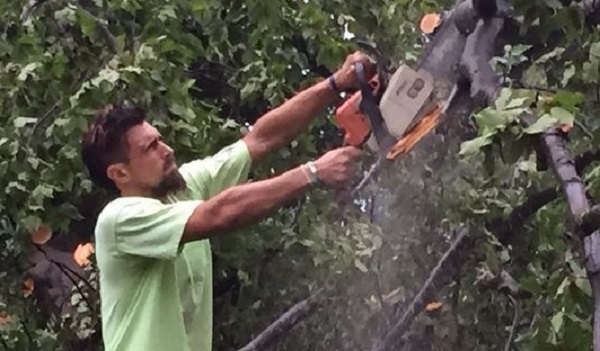 Tuesday’s thunderstorms knocked out power, downed tree limbs and at one warehouse, ripped bricks off an outer wall.

(York) — National Weather Service investigators are delaying a visit to York County as they wait for an assessment of the damage from Tuesday’s thunderstorms — including the possibility of a tornado touch-down — according to a weather service official.

Tyburski said he and his colleagues had seen footage shot from the West York High School football practice of a nearby funnel cloud charging across the horizon, triggering what appear to be transformer explosions.

“Typically, we go down if it appears there was any tornadic damage,” he said, as opposed to straight-line winds. “Did that (the funnel cloud) impact the ground and if so, what kind of damage did we have?”

On Tuesday, the National Weather Service issued a tornado warning for York and Adam counties. In this video, you can see a storm come through West Manchester Township. Ed Mahon

Tuesday’s storms felled trees and tree limbs, which in turn pulled down power lines, sparking power outages. By late Wednesday morning, there were less than 4,000 Met-Ed customers without power throughout York County, according to parent company First Energy’s website.

In West York, an entire brick outer wall was torn off by the storm. The wall was formerly attached to the Big Ugly Warehouse, located in the 200 block of South Sumner Street. Across the street, a trailer had been upended, its load threatening to spill out of its torn floor.

James Hope, the borough’s code enforcement officer, said the warehouse had been condemned, but he was waiting for an engineer to arrive and examine the damage.

At York’s Penn Park, the site of the What The Food Trucks event on Sunday, where thousands enjoyed food, family and fun, was ravaged by the storm, with numerous downed trees and two utility poles that had been snapped in half.

Tyburski said showers — but not thunderstorms — will continue Wednesday night but will end Thursday morning, giving way to sunshine.

“That will set up a nice weekend, from Thursday afternoon through Monday,” Tyburski said. “Fair skies and comfortable temperatures near 70.”