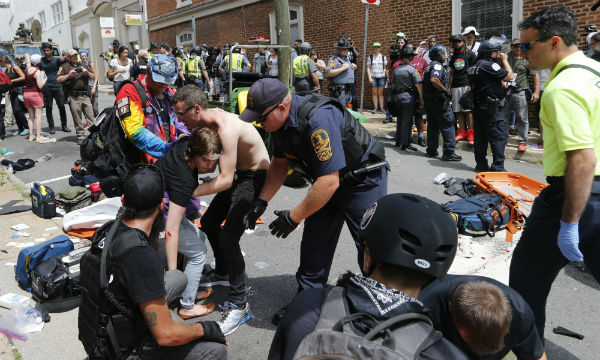 Rescue personnel help injured people after a car ran into a large group of protesters after a white nationalist rally in Charlottesville, Va., Saturday, Aug. 12, 2017. The nationalists were holding the rally to protest plans by the city of Charlottesville to remove a statue of Confederate Gen. Robert E. Lee. There were several hundred protesters marching in a long line when the car drove into a group of them.

Now some Pennsylvania lawmakers are calling for tougher hate crime laws in the commonwealth in response.

Pennsylvania passed a more comprehensive hate crime law in 2002, but it was struck down on a technicality in 2008. Bills now in the House and Senate would restore the protections.

House Democratic Caucus Chair Dan Frankel says lawmakers may not have influence over events outside the state, but this legislation is still important.

“We can make a statement here in Pennsylvania saying that we reject this kind of hatred, these kind of groups who target minorities, who target people on the basis of their religion, their ancestry, their sexual orientation and gender identity, which were all on display in Charlottesville,” he said.

Frankel says bipartisan support for the current proposals is meager.

He’s calling on Republican leaders to bring the legislation up for a vote.

“That would protect our citizens, I think and make a statement to the rest of the country that we aren’t going to tolerate this,” Frankel said.

Prospect of property tax elimination is not what it seems