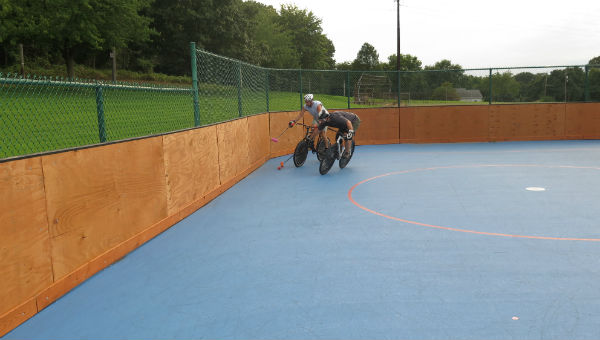 Ben Allen’s entertaining Transforming Health story on Bike Polo captured the award. It uniquely explained how the competition works and what drives the athletes. It was the second year in a row Allen’s work was recognized with a National Murrow honor.

“With this latest national Murrow award, Ben joins a select group of multi-award winners at WITF,” said Kathleen Pavelko, WITF’s President and CEO. “We are also proud of Ben’s breadth of expertise in reporting on topics as diverse as healthcare and sports.”

“I’m truly stunned to receive this honor,” said Transforming Health’s Ben Allen. “I’m just thankful people in central Pennsylvania are willing to open up and share their stories with me, on a whole host of issues. I hope my work, and the work of all the reporters at WITF, show that journalism we do focuses on illuminating issues, adding context, and holding the powerful accountable, but also sometimes having a little fun and showcasing a slice of life in central Pennsylvania.”

This year, the 46th anniversary of the awards, RTDNA is presenting 117 national Edward R. Murrow Awards in 15 categories including excellence in innovation, breaking news, investigative reporting and more. RTDNA received nearly 4,300 entries during the 2017 awards season.

In the last 10 years, WITF has earned 13 National Edward R. Murrow Awards for excellence in broadcast and online journalism.

The central Pennsylvania public media organization competed against radio stations in markets 51 and smaller. WITF‘s 13 National Murrows since 2007 are the most of any Pennsylvania public media organization over that span.The 2017 award is the station’s third in the sports category. Allen is the third WITF reporter to receive multiple National honors.

“Congratulations to Ben. As team lead of our Transforming Health project, he examines a diverse range of health issues in Central Pennsylvania. Whether he’s covering health care mergers, opioid addiction, or bike polo, his outstanding work has an impact on the knowledge and understanding of our viewers, listeners, and readers,” said Cara Williams Fry, Senior Vice President and Chief Content Officer.

“Ben is one of the hardest working and devoted journalists in the region. I’m tremendously proud to see his efforts recognized yet again on the national level,” said Tim Lambert, WITF’s Multimedia News Director. “His story on bike polo is an example of how our reporters strive to provide the best public service possible, whether it is shining a spotlight on serious issues or just telling a unique story.”

Since 2006, WITF has received 56 RTDNA Regional Edward R. Murrow Awards — the most of any media organization in Pennsylvania. That total includes seven 2017 Regional Murrows. In the last seven years, WITF has garnered 44 Regional Murrows — a number that is among the top stations in the country in Markets 51 and smaller.

A complete list of winners with links to the winning entries for the 2017 National Edward R. Murrow Awards can be found at rtdna.org.