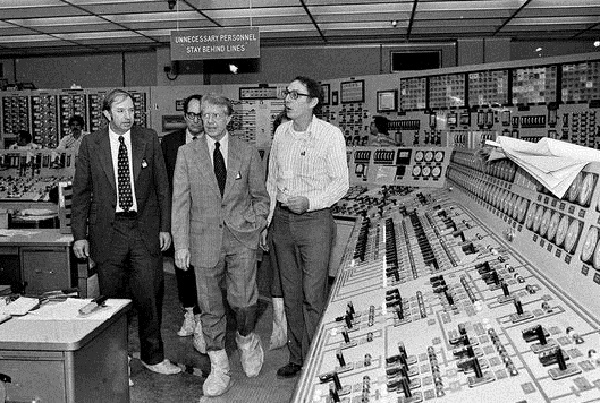 The study marks the first time the partial meltdown can be connected to specific cancer cases, the researchers have said.

The findings may pose a dramatic challenge to the nuclear energy industry’s position that radiation released had no impact on human health.

The study was published Monday in the medical journal Laryngoscope, one day before Exelon Corp. announced that Three Mile Island would close in 2019. It’s likely to come as another blow to a nuclear power industry already struggling to stay profitable.

Exelon officials declined to comment on the findings, pointing out that it doesn’t own the damaged reactor and wasn’t running the plant during the accident.

Dr. David Goldenberg, a surgeon and thyroid researcher, led the study after seeing anecdotal evidence for a connection. “I’m always wary when people say ‘there’s nothing to see, here,” he said.

Although Pennsylvania has the nation’s highest rate of thyroid cancer, most of that cancer has nothing to do with Three Mile Island, Goldenberg said.

However, thyroid cancer caused by low-level radiation has a different “mutational signal” than most thyroid cancer, Goldenberg said. He and his colleagues used molecular research that had been pioneered after the Chernobyl nuclear disaster to find that genetic signal.

The scientists screened out many thyroid cancer patients, limiting their study to 44 people who were born in counties around Three Mile Island, present during the March 28, 1979 accident and treated at Penn State Hershey Medical Center.

“We found a change in this signal from sporadic to radiation-induced in the affected timeline to those exposed to low-dose radiation,” Goldenberg said. Those people developed thyroid cancer on average 5 to 30 years after exposure and about 11 years earlier than the average thyroid cancer case.

Goldenberg stops short of saying that the accident “caused” the thyroid cancer, instead saying there’s a “possible correlation” between the accident and the cancer.

“I do stop short, and I’ll tell you why,” Goldenberg said. “This is the furthest we’ve come. There are 44 patients in this study. It’s by no means conclusive.”

The next step is to expand the study by tapping into resources from other regional hospitals, he said.

The study contradicts conclusions about Three Mile Island held by many nuclear energy proponents, including the Nuclear Regulatory Commission.

University of Pittsburgh Medical Center completed a study in 2000 that found that the accident did not cause an increase in cancer mortality among people living within a five-mile radius of the plant, said Neil Sheehan, Nuclear Regulatory Commission spokesman.

The NRC is eager to review the new findings, Sheehan said. However, to date, he said, evidence shows that the radiation released posed no danger to the community.

For those who have long disagreed with the industry, however, the new study adds credence to their beliefs. Cindy Folkers, a scientist at Beyond Nuclear, which opposes nuclear energy, said she’d be more surprised if the study had shown no connection.

Folkers takes issue with the way that the NRC and others have defined the level of exposure. “They’ve called the shots on this conversation for a number of decades now. If you’re not asking the right questions, then you’re not going to get the right answers that society needs to have.”

She cited a 1997 study by University of North Carolina Chapel Hill scientist Steven Wing that showed a connection between the accident and lung cancer and leukemia in a “plume” that traveled from the plant.

“It was the only study that actually showed a health impact, and it was because of how he looked at the data,” Folkers said. However, the nuclear energy industry dismissed it because they disagreed with its approach.

The new study, coming from a prominent university, is likely to reopen the inquiry into the accident, Folkers said.

It also could lead to another round of lawsuits, she said, referring to the 1996 class action where U.S. District Judge Sylvia H. Rambo ruled there was insufficient evidence to link radiation from the Three Mile Island accident to health problems in test cases of about 2,000 plaintiffs.

Christine Layman was 21 years old, living within five miles of Three Mile Island, when the accident happened. Now, after suffering thyroid disease and other issues she attributes to radiation exposure, she is elated to read the new findings.

“This is just the beginning,” Layman said. “This is going to open up everything.”

Layman is assistant to the filmmaker for a movie about Three Mile Island. For years, she and many others have looked to scientists to confirm what they believe — that Three Mile Island had more human health impact than what the government will say.

Goldenberg struggles with the knowledge that his findings also may lead some people to wrongly blame Three Mile Island for their medical issues. He knows that the study might be met with some opposition and emphasizes that it isn’t his job to think about the consequences — only the data.

“I am not an advocate one way or another,” He said. “I don’t care. I am a scientist. I go where the data takes me.”

*An earlier version of this story is below*

The study, which appeared Monday in a supplement to Laryngoscope, a medical journal, marks the first time researchers have connected the partial meltdown to cancer rate increases.

It’s limited by its small sample size and will be followed up with a larger number of patients from regional hospitals “to determine if the correlation continues in a larger sample.”

The effort breaks from previous studies about thyroid cancer and Three Mile Island, which were demographic studies and showed “variable results.”