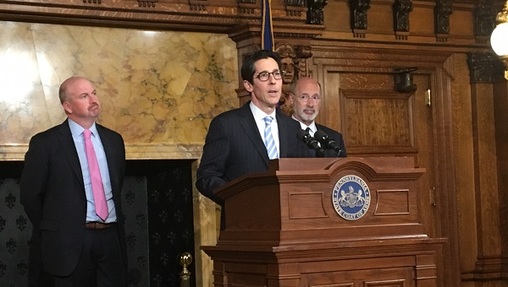 The governor and state treasurer are calling for a shift in investment strategies. (Photo by Katie Meyer/WITF)

(Harrisburg) — Governor Tom Wolf and state Treasurer Joe Torsella say they have a way to cut down on Pennsylvania’s mountainous pension costs: change investment strategies to cut down on fees to outside money managers.

Spokespeople for the state’s two biggest pension funds say they’re open to considering the idea, though they note, they’ve already been doing it to some extent.

The fees Pennsylvania pays to outside investors are among the highest in the country. In 2015, they made up almost $600 million of the money spent by the systems for retired state and public school employees.

Torsella said to avoid those external costs, it’s important to shift pension funds to passive investments, and bring fees down to national averages.

SERS and PSERS would have to agree to the investment changes. Both said they’ll raise the suggestion in upcoming board meetings.

A spokeswoman for PSERS notes, the fund already reduced fees to outside managers by $142 million, or about 25 percent between 2012 and 2016.

A SERS spokeswoman had a similar comment, noting the smaller fund has cut down the fees by $73 million since 2010.