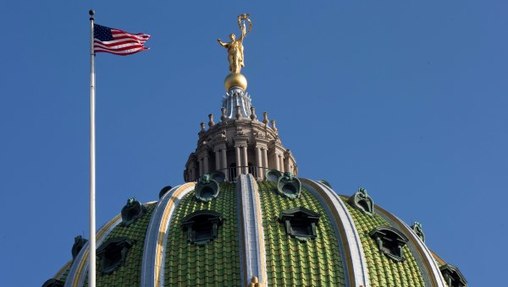 The budget is due at the end of June. (Photo by AP)

(Harrisburg) — With the July budget deadline beginning to creep up, the state legislature is entering its busy season.

Several component parts of what will eventually be next year’s fiscal plan are under construction, and sticking points are already surfacing–even within the House and Senate’s Republican majorities.

The House GOP passed its budget proposal early this month, and while it’s mainly balanced on deep, across-the-board cuts, it does rely on some new funding streams.

Namely, so-called vice revenues–things like liquor and gaming expansions, which the House has been pushing for consecutive sessions.

“The budget that the House passed and sent to the Senate reduced spending from the current budget, yet revenues are still necessary,” he said. “But the votes in our chamber don’t exist for raising the sales and income taxes.”

Senate Majority Leader Jake Corman, however, has been cautious about relying so heavily on such revenues, according to spokeswoman Jenn Kocher.

“He thinks that those decisions should be policy decisions, not budgetary decisions,” she said.

The Senate has not offered up a budget proposal yet, but Miskin said he looks forward to seeing what alternatives the chamber proposes.