Bears head to the playoffs on a five game win streak 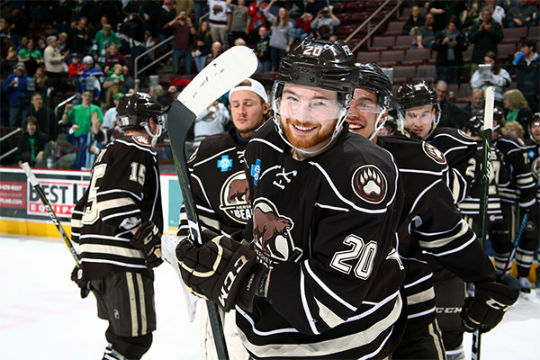 (Hershey) — Netminder Vitek Vanecek stopped all 28 shots he faced to lead the Hershey Bears hockey team to a 3-0 victory over the Providence Bruins on Saturday night at the Giant Center.

The shutout was Vanecek’s fifth of the season, and Hershey closed the regular season with a fifth straight victory.

With the win, Hershey leapfrogged Providence in the Atlantic Division standings.

The Bears finished third, ensuring a first round playoff matchup versus the rival Lehigh Valley Phantoms.

For the second straight night, Hershey forward Jakub Vrana opened the scoring. The forward notched his 19th goal of the season at 13:34 of the opening period to give Hershey a 1-0 lead.

In the second period, Hershey notched back-to-back goals in a span of just 1:06. Playing in just his third game of the season, forward Dustin Gazley ended the 2016-17 campaign with a bang. The forward notched his first goal of the year, scoring shorthanded at 4:01.

At 5:07, Hershey struck again. Defender Mattias Backman collected his first goal as a member of Hershey to make it 3-0.

Vanecek finished the night with 28 saves for Hershey in his first start since Mar. 18. Providence outshot Hershey 28-20.

The Bears have announced the schedule for the club’s first round playoff matchup with the Lehigh Valley Phantoms.

The Bears will open the 2017 Calder Cup Playoffs on the road at Lehigh Valley on Friday, Apr. 21. Hershey’s first home game will take place with Game 3 on Wednesday, Apr. 26.