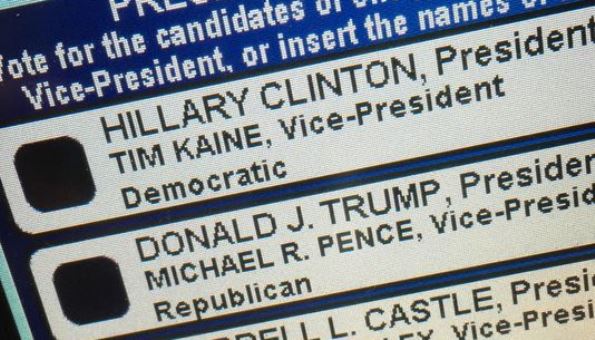 There have been some reports that voting machines acting faulty. There have been no confirmed cases that a voter selected one candidate and it was processed for another candidate. (Photo: Michael K. Dakota, Lebanon Daily News)

(Lebanon) — Lebanon County had problems with voting on Tuesday involving voting machines and people getting turned away at the polls.

Now, concerns about election procedure might linger in the county.

Some people reported attempting to cast Republican votes but instead saw Democratic choices flash on the screen for final review before submission.

These voters apparently caught the errors in time and rectified their ballots. And the county re-calibrated a few machines.

“There, unfortunately, may have been those that did not catch the mistake and had their votes cast in an erroneous manner,” says Casey Long chairman of the Lebanon County Republican Committee.

Long says dozens of these reports were coming in all day from all over the county.

But Michael Anderson, the county elections chief, says he consulted poll judges and couldn’t verify those reports referenced by Long.

Then, there were the provisional ballots.

Some Lebanon voters with registration issues were turned away on Tuesday instead of using provisional ballots.

Provisionals don’t count toward the final total until being reviewed by election officials, a process that typically takes days.

But Tuesday’s high turnout overwhelmed the election office phone lines, even when we were later after traffic had tapered off as polls prepared to close.

Poll workers couldn’t get through, in some cases for as long as an hour, and some voters didn’t have time to wait and, ultimately, were turned away.

“Obviously, I’m not at the polls. I don’t know that until they bring it to me,” Anderson said. “So they showed me the law, they asked if we could look into it. and we made the decision after that discussion to go ahead and issue those provisional ballots.”

Anderson says the point is to ensure voters can cast a full ticket, since elected offices differ among precincts.

Pennsylvania Department of State guidlines are clear, though: “No voter should be turned away without the opporutnity to cast a provisional ballot,” including those at the wrong polling place, who don’t appear on the list or whose reigstration cannot be verified.

Democratic Committee Chair Lois Herr was one of the party officials who alerted Anderson, who’s a registered Democrat serving in a nonpartisan role.

“There was widespread problems with the voting system throughout the county and it’s something that we hope that the county will take a look at after this election,” Long said.

Editor’s note: This post has been updated to add details about state guidelines for casting and providing provisional ballots.

All the election results in one place