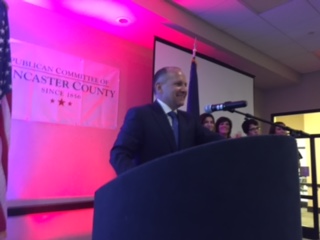 With 98.6% of statewide precincts reporting, Smucker led his Democratic rival 53 to 44 percent.

“I want to help reform Washington D.C. to ensure the American Dream stays alive and thrives,” Smucker told a cheering crowd at the GOP watch part at Spooky Nook sports.

The district covers most of Lancaster County as well as parts of Berks and Chester Counties. It was represented by Congressman Joe Pitts (R) for nearly twenty years, and with the open seat Democrats were hoping to flip it.

They picked a political newcomer, Christina Hartman, who had worked as a consultant to nonprofit groups. She got help from the national Democratic Congressional Campaign Committee, but ultimately her efforts fell short. Columbia businessman Shawn Patrick House also ran as a Libertarian, and received a little over 3 percent of the vote.