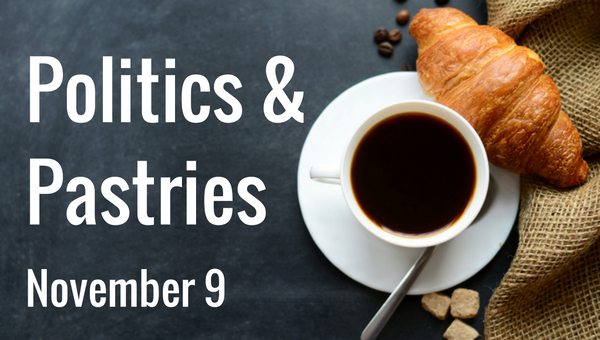 It’s finally over.  The long, unprecedented 2016 presidential campaign that began almost two years ago is now history.  And it will be one for the history books.

Republican Donald J. Trump has been elected the 45th president of the United States in a stunning upset.  The question many are asking today is how did Trumpt defeat Hillary Clinton to pull opff the upset?  Was there more anger than anticipated, did rural America rise up, was it an anti-Clinton vote and now that Trump will be in the Oval Office – how will he govern?

That same question could be ask about all those who were elected deal with the many issues and challenges the nation faces?

Wednesday’s Smart Talk is a special one.  The program is being produced in the atrium of the WITF Public Media Center in front of a live audience. Those watching the show can ask questions or state their opinions about Election 2016.

The content of the program itself focuses on the results, an analysis of the election and what lies ahead for the winners.

We also talk with a few of the candidates to get their thoughts on what influenced the outcome of the election and what’s next for them.

I’ve started not answering my phone unless I recognized the Phone #. In elections past, I’ve always been polled at least once during the cycle. Nothing this time. Is it possible that folks screening their calls could’ve effected the numbers?     -Rachel

We have spent so long speaking about racism from the standpoint of it being Caucasian people perpetrating it against African Americans and Latinos and refused to use the terms that white people are being depressed and suppressed to lift up other races. Instead we need to focus on lifting the oppressed without treading on those who are “the privileged”, when neither group is at fault for their position. This election was, in my opinion, about saying we want people equal, but equal without oppression of anyone.     – Manuel

People may feel he is not totally qualified but they want change. They want someone who is not “owned” by politics, judges and BIG business. I think and hope he will try to put the people first and do what he said he would. Hopefully he will put a stop to giving our country away to illegal immigrants.    – James

As Carville used to say, PA is Pittsburgh, Philadelphia and whole lot of Alabama in the middle.  Coming from Central Pa, I have been saying the Alabama worked hard to elect Tom Wolf (form York) and proved the center of the state has a voice. Now they have found their voice and that voice is angry.

I grew up in Central PA and have lived in Boston, DC and San Francisco. During elections I would say to my friends in these cities “you don’t realize there are a lot of people in the center of the country who have completely different issues.” Now that I am back in PA I realize the rural communities are disenfranchised and a struggling like the big urban centers; but they don’t have the name recognition like Detroit, Baltimore, NYC.

While the message and the method may have been distasteful, I am hopeful that Trump will shed some light on the plight of our rural communities.     – JT, York

Was there a large increase in total voter turnout versus previous presidential elections?  And did they all vote for Trump?     – Sarah

Please ask your guest how we can make our presidential election shorter?  I want the election cycle to be shorter so we can focus on issues instead of personality.     – Alyson, York

A story I’d love to hear is on the turn out.  Our local precinct had it’s largest turnout in at least a decade.  It was amazing.  What’s more, people were in lines for at least an hour, but were pleasant and patient.  Do you have those numbers to report on?     -K

If the voters want change, why didn’t they vote out the incumbents?     – Frank

i’m a small business owner in central Pennsylvania and I have two young children. As I woke my kids up this morning they asked who won the election I explained the Donald Trump defeated Hillary Clinton. My son asked me “how can we respect the presidents that doesn’t respect people that are different?” How do you suggest I answer my son?     – Jud

Hadn’t made my mind up until last week   Letter came from health insurer wanting $800 more per month for less coverage. That did it.     – Greg, Chambersburg

I realize Terry Madonna doesn’t think people voted against Hillary because she was a woman, however, he is discounted women being mean to women. He is in fact, a man.

If women would have COME OUT to vote for Hillary she would have won but the women that did come out voted for Trump.

It upsets me that 2 men are discussing an election of a man and dismissing gender so easily. Women know women, men remember their mothers.     – anon

To what extent do the election results reflect larger global change trends that are out of control of any country, including this one?     – Jim, Halifax

I think we continue to get it all wrong. The reasons why people vote the way they do are difficult to understand. One thing we learned here is that people were not willing to admit they liked Trump, a person that on the surface appears the antithesis of what a presidential candidate should be. My wife was like this, she spent all her time saying bad things about Hillary but never admitted to liking Trump. Yet, I know she liked Trump very much.

At the end Trump portrayed the image of someone who many of the American people look up to, much of which was a myth: self-made billionaire, blond, able to attract women and use them as he wished, and alpha male.

This is multiplied by the fact that on the other side there is woman running who is secure, independent, and powerful, and many of the American people did not like this.

I do not buy the excuse that people wanted change or wanted more jobs. The American people would have voted for Trump if he promised them nothing. It is the clash of the above two personalities that led to the final results.