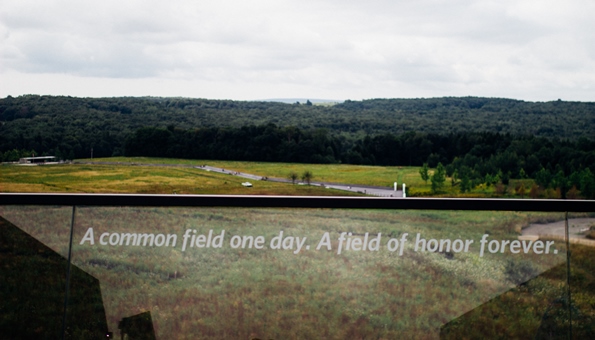 Fifteen years ago Americans woke up to a horror never before experienced.  A warm, sunny Tuesday morning was forever marred when 19 terrorists hijacked four commercial airliners.  Two were flown into both World Trade Towers in New York, one into the Pentagon.  The fourth, a San Francisco bound United Airlines flight carrying 40 souls was hijacked as well.  Once the passengers learned of the previous strikes from loved ones on the ground, they decided to overtake the terrorists.

In the chaos of charging the cockpit in an effort to subdue the hijackers, the plane plunged into a grassy field in Southwest Pennsylvania.  Nobody knows for sure where the terrorists intended to aim the 757 but the actions of those passengers, their sacrifice, saved an untold number of lives.

This Sunday, we will remember the victims of 9/11, specifically those who perished on United Flight 93.

On Thursday, SmartTalk traveled to Shanksville, Pennsylvania, site of the crash.  A boulder marks the spot where the airliner plowed into the ground at 563 miles per hour.

WITF Multimedia News Director Tim Lambert’s family owned a portion of the land that was part of the crash site.  He spoke to SmartTalk’s Scott LaMar about visiting the site three weeks after the crash:

“We weren’t allowed to go into the woods because there was still debris coming down from the sixty foot tall hemlock trees, so we weren’t allowed to go into the woods.  You could smell jet fuel – it’s always a windy day always here and you could smell jet fuel when the wind picked up which was startling.  So we asked him ‘What happened to the plane?  What did you find?’ and he bent over and picked up a dime-sized, a quarter-sized piece of metal and he said ‘Well, it just broke into pieces like this.’  And it was like a shutter in a camera going off ‘chk-chk’ and then it was like everywhere you looked there was debris from the plane.”

The boulder.  A wall of names.  Scattered flowers and notes in tribute to the victims.  A warm, steady breeze is the only sound heard as visitors contemplate the importance of their surroundings and silently mourn.  Keith Newlin is the Deputy Superintendent of Western Pennsylvania Parks, a division of the National Park Service.  He acknowledged the reverence felt by visitors to the memorial:

“When people realize the nature of their [the passengers] actions and how short of a time frame that it took that they absolutely are awestruck that they took that action in that short time frame and that they gave their lives to protect the capitol, whatever the target was.”

Kathie Shaffer is the Oral History Specialist at the Flight 93 Memorial.  Her role is to archive the stories of people involved with Flight 93 – from victim’s families to first responders to law enforcement officials  – and preserve their stories.  Shaffer spoke of how the families of victims find comfort from such a memorial:

“I think for some family members it’s become a place of solace, now.  When they visit, today we can hear the crickets, the geese, the wind. You feel the wind, you hear the wind.  And it’s a place to reflect and the memorial landscape allows for that.”