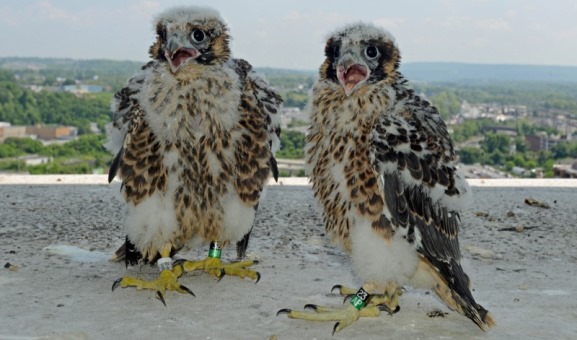 (Harrisburg) — State officials got their first up-close look this week at three young peregrine falcons that recently hatched in Harrisburg.

The falcons, two males and a female, emerged from their eggs in mid-April in a nest located on a 15th floor ledge at the Rachel Carson building which houses the state Department of Environmental Protection.  DEP Secretary John Quigley calls it an example of nature in action.

“They teach us that we are connected to the natural world.  They are, I think, the best educators that we have, and that’s no offense to our employees and our great staff.  They symbolize our connection to nature and so many people get so attached, myself included, to these birds every single year, it becomes addictive,” Quigley said.

The birds were given a clean bill of health and were fitted with ID bands.

In the 20 years since the nest was first installed, a total of 61 falcons have successfully hatched.