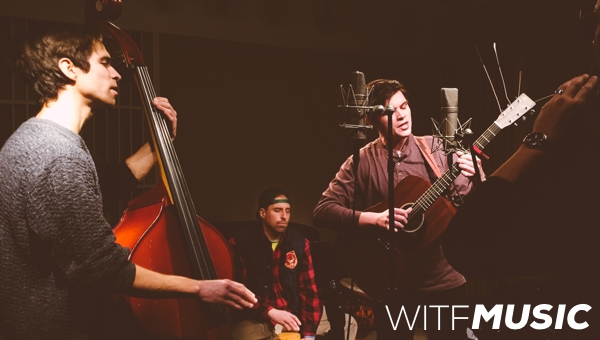 That was about two years ago. Since then, the band has pushed itself to play out at least three times a week. “We played 180 last year and our goal is 150 this year,” Matt says. “So that’s about 14 shows a month.”

Matt plays a variety of percussion instruments from a tamborine attached to his foot to shakers, and the whole thing is anchored by the cajon, a box that he sits on and hits with his hands. Joe plays upright bass and shares lead vocal duties with Vince who alternates between acoustic guitar and banjo.

They’re very serious about playing music and about the business of running a band. “Our goal is to take it all the way to the top of the music industry,” Matt says. “So what we’re doing right now is working to build our brand to emulate what we would have if we were signed with a record label. So getting all of the partners and relationships in place to be able to display a very professional image independently, everything from video to photography to website. We have several interns on board right now who are handling social media and booking…That’s what we’re constantly working to build.”