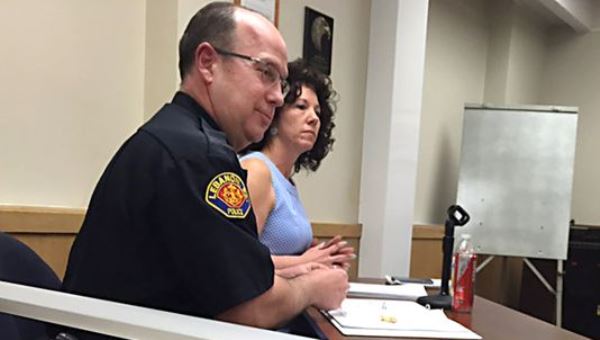 (Lebanon) — In a surprise announcement, Lebanon police Chief Daniel Wright said he was turning in his badge after 30 years on the force.

Wright made the announcement to the media in Mayor Sherry Capello’s office before Thursday’s City Council meeting.

Wright, 52, said he is leaving on April 8 to take another job. Although he did not reveal what that position will be, he said it will be made public in a week or two.

“An opportunity has presented itself that allows me to be relevant and be around, so I’m taking it,” he said.

A graduate of Cedar Crest High School, Wright took a job with the department in 1985 after graduating from Indiana University of Pennsylvania.

“When I came back, I was a new face in town because I had just gotten back from college, and they thought I’d be a great guy for an undercover drug operation downtown,” he recalled. “Right out of the police academy, I spent six months downtown buying drugs from various people, to include marijuana and cocaine and hashish and some other things.”

After being promoted to detective in 1995, Wright rose through the ranks and was a captain in Februrary 2009 when he was appointed chief of police by then Mayor Trish Ward to replace Bill Harvey, when he became chief of the Ephrata Borough Police Department.

“I’ve been fortunate,” Wright said. “I’ve done every job in the police department, and it has helped me as a leader because I know what everybody is required to do.”

Wright said the decision to leave the Lebanon Police Department was not easy.

“This is extremely difficult,” he said. “I have a great job. I have a great boss. I think Mayor Capello is a great mayor. She’s the only boss I’ve ever had who consistently works harder than me.”

Capello said she is saddened to see Wright leave but understands his decision. She called him a strong leader who connected well with the community.

“He is very good at providing explanations to the residents so they understand the situation,” she said. “They may not always agree with it, they may not like the information, but they get the information from the chief.”

Capello said Wright has a good command of his staff and leaves the department in a strong position, stressing that he is leaving on very good terms.

“This isn’t because there is a problem or an issue,” she said. “This is for an opportunity, an understandable opportunity.”

Capt. Todd Breiner, who is a favorite to succeed Wright, will serve as acting chief when Wright leaves.

“I will probably do an assessment of the department, take my time and make sure that I make the right decision,” Capello said. “But again, knowing just through our discussions and our meetings, I know again that succession planning is very important. And I think together we’ve done a really good job of promoting people who have a strong work ethic.

“Our crime stats show our crime is down,” the mayor continued. “Our clearance (arrest) rates are exceptional. Usually, I think, in my opinion, you bring someone in from the outside when you have problems. When you have issues with morale or if things just aren’t going right. And I think things are heading in a positive direction — are in a positive light. So that is going to be my last option — would be to bring someone in from the outside.”

Wright said his favorite part of the job was interrogating suspects until they confessed or made an incriminating statement. But when reflecting on the highlights of his career in Lebanon, he said, it is the support that he and the department receive from the community.

He mentioned the response after two sidewalk shooting deaths. One occurred shortly before noon, on July 31, 2009, outside the Lebanon Farmers Market on South Eighth Street, when 20-year-old Stephen Santiago was shot and killed by then 16-year-old Sasha Hernandez, who is serving a sentence of 39 to 75 years in state prison. The second happened on Ninth and Mifflin streets on the night of Aug. 3,  2013, when 33-year-old Juan Rodriguez-Rivera was gunned down by then 36-year-old David Rivera of Lebanon, who is serving 25 to 50 years in state prison.

The second homicide occurred just three days before National Night Out, and Wright said he was apprehensive about the response he would get at an event held a block away from the murder site.

“The officers and myself heard nothing but, ‘Hey guys be careful out there,’ ‘Great job,’ ‘Keep up the good work,'” he recalled. “I’m always surprised how people are going to respond when it comes to things like that. Those are feel-good moments, that you know you are doing a good job and you know your community has confidence in you, regardless of what type of incidents are occurring.”

*This article is part of a content-sharing partnership between WITF and the Lebanon Daily News.