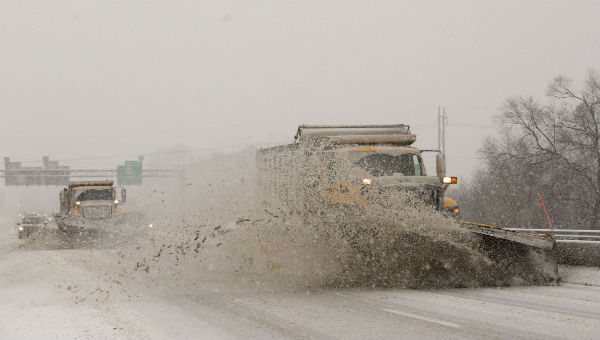 (Harrisburg) — A winter storm warning will go into effect for much of the midstate this evening through early Sunday morning, as the region prepares for heavy snowfalls through tomorrow night.

As much as 18 to 20 inches of snow is expected in at least five  counties: Adams, Cumberland, Franklin, Lancaster and York.

Governor Tom Wolf has declared a state of emergency.

“To ensure that state agencies can respond with resources for counties to use to help their communities and residents as quickly as possible,” he says. “A state of emergency actually allows money to flow more quickly in case we need it.”

Plowing crews and state troopers are prepared to work overtime to clear highways and respond to emergencies.

“Personnel will work 12-hour shifts and then ccontinue on through the night. We’ll see how things should go on Sunday,” he says. “The snow should theoretically be out of here on Sunday and hopefully, we’ll be able to begin to wind things down.”

“I don’t anticipate a lot going on between the evening hours and about midnight. But after midnight, I do anticipate snow to start picking up in intensity overnight into (tomorrow) morning moving into (tomorrow) afternoon,” he says. “We’re talking maybe 12 to 18 inches-plus south of the Turnpike. Places from south of York to Lancaster into Gettysburg could see two feet of snow.”

Governor Wolf says people should look out for one another over the next few days.

“If you can, take the time to look after your neighbors and your family,” he says. “Make sure that elderly family members, elderly neighbors…they have everything they need. They have the all food they need. That they’re warm and their all their ready to go through whatever this weather gives us.”

Winds of 15 to 25 miles-per-hour are anticipated, accompanied by stronger gusts.

People are being urged to take common-sense safety precautions and not to go outside during the storm if possible.

Acela Express, Northeast Regional and other services between locations in Virginia and Boston, as well as Keystone Service between Harrisburg, Pa., and New York, will be operating throughout the weekend, but will have modified schedules, with fewer trains. Most Northeast Corridor service between Washington, D.C., and Boston will operate as scheduled on Friday, Jan. 22. Passengers who have reservations on affected services are being contacted and accommodated on other trains with similar departure times or offered alternate travel dates.

The following Keystone Service trains will not operate on Saturday, Jan 23:

Pennsylvania Attorney General Kathleen G. Kane’s office says price gouging restrictions prohibit anyone involved in the sale or distribution of consumer goods or services from “unconscionably excessive” increases above average prices during the emergency and for 30 days after its conclusion.

The state’s Price Gouging Act gives the Attorney General’s Bureau of Consumer Protection the authority to investigate price gouging complaints and allows for penalties of up to $10,000 per violation, along with restitution and injunctive relief.

The restrictions required by the act not only apply to businesses involved in direct consumer sales, but also to manufacturers, suppliers, wholesalers and distributors of consumer products and services.

Darrell Auterson will step down as YCEA CEO