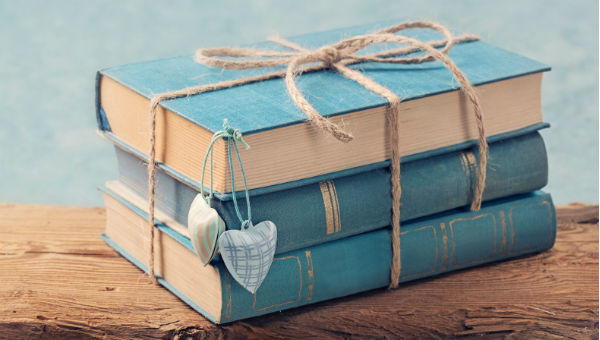 It’s early December so it must be time for Smart Talk’s annual show focusing on books as gifts for the holidays or books you would like to read during the holiday season.

Books have always been a thoughtful and treasured gift.  Almost everyone enjoys and can appreciate a book as a present — whether it is fiction, a novel, non-fiction, poetry, or a how-to book.  Maybe one of the classics.  We’ll also have a few book suggestions for children or teenagers.

On Tuesday’s Smart Talk, we’ll discuss the books that would make great gifts.  They may or may not be new or on the bestseller lists, but our panel will recommend and describe several titles to think about.

Joining us will be Catherine Lawrence, co-owner of the Mid Town Scholar Bookstore in Harrisburg and a writer herself and Todd Dickinson, co-owner of Aaron’s Books in Lititz

We’d like to hear your suggestions as well.  What books do you think your friends or loved-ones would enjoy or what books are on your wish list this year?

“A stunning poetry debut: this meditation on the black female figure throughout time introduces us to a brave and penetrating new voice.”

in the form of swimming

in the form of a carved standing

The Road Not Taken: Finding America in the Poem Everyone Loves and Almost Everyone Gets Wrong by David Orr.

“A cultural “biography” of Robert Frost’s beloved poem, arguably the most popular piece of literature written by an American. … The poetry columnist for The New York Times Book Review…offers a lively look at the poem’s cultural influence, its artistic complexity, and its historical journey from the margins of the First World War all the way to its canonical place today as a true masterpiece of American literature.”

Stories In The Stars (a nicely bound, illustrated book on constellations) by Susanna Hislop

Gilliamesque: A Pre-Posthumous Memoir by Terry Gilliam (He’s the animator and only non-British member of Monty Python.)

Dr Mutter’s Marvels: A True Tale of Intrigue and Innovation at the Dawn of Modern Medecine  (story of Dr Mutter, from the Mutter museum in Philly. It’s a little dark, but a fascinating biography – just out in paperback) by Cristin O’Keefe Aptowicz

The Life-Changing Magic of Tidying Up: The Japanese Art of Decluttering and Organizing by Marie Kondo

Published in late 2014, this completely took off this year and is now a national best-seller. A new twist on the normal “clutter clean up” books.

The Muralist by B. A. Shapiro

The Japanese Lover: A Novel  by Isabel Allende

Avenue of Mysteries by John Irving

Just published this fall, a charming children’s book by Harrisburg’s national award-winning children’s author and illustrator Jonathan Bean that has homeschoolers cheering as it presents a bright and colorful look at how homeschooling is accomplished. You’ll see the same family from his popular children’s picture book Building Our House and get an even more in-depth look at the home that was built.

The Crossover by Kwame Alexander

This year’s Newbery Medal winner. A great twist is that it is a novel in verse instead of your regular read.

More details: “‘With a bolt of lightning on my kicks . . .The court is SIZZLING. My sweat is DRIZZLING. Stop all that quivering. Cuz tonight I’m delivering,‘ announces dread-locked, 12-year old Josh Bell. He and his twin brother Jordan are awesome on the court. But Josh has more than basketball in his blood, he’s got mad beats, too, that tell his family’s story in verse, in this fast and furious middle grade novel of family and brotherhood from Kwame Alexander.”

Basically one of the coloring books that started the whole adult coloring trend which is now thought to relieve stress and promote calm. Absolutely beautiful, delicate ink drawings to color. A staff favorite!

Coloring Books – For All Ages!

And a few other titles that our staff recommends for creative folks who need some inspiration:

The Steal Like An Artist Journal: A Notebook for Creative Kleptomaniacs

(this author, Austin Kleon, wrote a couple of books with creative ideas, but this is an actual activity book. “Page after page of ideas, prompts, quotes, and exercises are like a daily course in creativity. There are lists to fill in–Ten Things I Want to Learn, Ten Things I Probably Think About More Than the Average Person.”)

Bestselling novelist B. A. Shapiro (The Art Forger) explores the forgotten story of the Works Progress Administration and the Abstract Expressionist movement through her two compelling characters, one a talented young artist in New York City in 1940 who goes missing, and the other an art curator in modern New York who discovers new clues to an old mystery.

In the Heart of the Sea: The Tragedy of the Whaleship Essex

True story, basis of Melville’s novel Moby-Dick and the new Ron Howard movie. Philbrick is a great storyteller and has clearly done extensive research on the wreck of this ship by a sperm whale.

In 2002, a young forensic pathologist in Pittsburgh, a new immigrant from war-torn Nigeria, discovered deeply disturbing damage to the brain of Pittsburgh Steelers Hall of Fame center “Iron Mike” Webster. His conclusions led to new understanding of the damage caused by repeated blows to the head in football – after overcoming significant pushback from the National Football League.

Brian Selznick is the Caldecott Medal-winning author and illustrator of The Invention of Hugo Cabret, which was adapted into Martin Scorsese s Oscar-winning movie Hugo. Here, he tells a story through intricate pictures of a boy who is shipwrecked, rescued, and goes on to found a brilliant family of actors that flourishes in London. Then his second (possibly related) story, told in traditional word narrative, is of a runaway in modern London who becomes captivated by a historic home, with its portraits and ghostly presences.

Author and photographer Nancy Rose creates homemade miniature scenes in her backyard, then photographs squirrels as they interact in this pretend world. Her first book was The Secret Life of Squirrels.

Longtime Harry Potter fans will love this new edition, with more than 100 beautiful illustrations in an oversize hardback book. Families just discovering Harry Potter will need one as well.