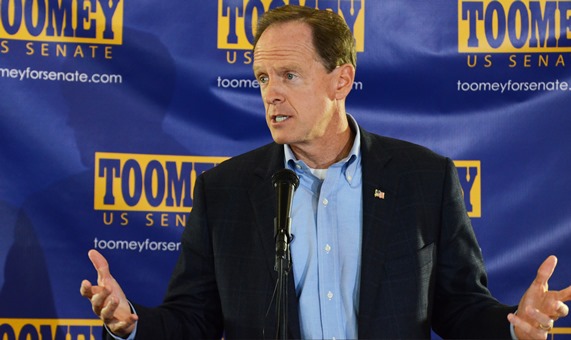 (King of Prussia) — Pennsylvania’s U.S. Sen. Pat Toomey formally kicked off his re-election campaign Sunday in King of Prussia, sounding a lot more like a moderate determined to appeal to Democrats and independents than the hard-line budget hawk he was seen as years ago.

“We’ve got a polarized political environment. It’s a little crazy in Washington sometimes,” Toomey said in his speech to about 150 supporters. “But I’ve learned that it’s possible to get things done if you’re willing to stick to your principles and look for common ground at the same time.”

Two of the six speakers at Toomey’s kick-off rally were union leaders, and two were were African-American.

He referred to his effort with Democratic Virginia Sen. Joe Manchin on gun control, and his support for the federally-funded dredging of the Delaware River to deepen the ship channel. And, he said, he works with Pennsylvania’s other U.S. Senator, Democrat Bob Casey, “whenever we can.”

“One of the areas we work together regularly on is filling vacancies on the federal bench,” Toomey said. “The fact is in the four and a half or so years I’ve been in the Senate, we have been able to recruit, vet, nominate, confirm 15 men and women across the commonwealth of Pennsylvania.”

Many judicial appointments are held up by partisan bickering.

Later in his 21-minute speech, Toomey hit some themes dear to conservatives, talking about the peril of runaway deficits and the importance of fighting the proposed nuclear deal with Iran. But he never railed against Obamacare, and sounded like somebody who wanted to work with everybody.

He never raised his voice once, even when he said he decided to seek another term.

Why King of Prussia?

Toomey didn’t hold a series of kick-off events across the state — his campaign officials noted that he does have a pretty demanding job in Washington.

But it makes a lot of sense for him to hold his one announcement in Montgomery County. It’s the third most populous county in the Commonwealth, stocked with independents and moderate Democrats who will turn out in big numbers in 2016, since it’s a presidential election year.

And doing the event here on a Sunday will mean he’ll get attention in the Philadelphia media market, even from television stations (TV assignment editors have mostly given up covering politics, except for the week before an election and on weekends, when they’re desperate for something to cover).

Toomey won’t really have a battle for re-election for some time, since Democrats have to fight first over who gets the right to face him.

Former U.S. Rep. Joe Sestak from Delaware County, who’s been running hard for months, released a statement saying that Toomey hasn’t voted to protect veterans and that he, a former admiral, has and will.

A statement from the campaign of Katie McGinty, former state environmental secretary and former chief of staff to Governor Wolf, said Toomey has voted to end Medicare and ship jobs overseas, and “has repeatedly shown that he is out of touch with Pennsylvanians.”

These claims and others about Toomey’s record will be vetted in the months to come.

Meanwhile, a third Democratic candidate for the seat has emerged. Mayor John Fetterman, of Braddock, a town near Pittsburgh told the Pittsburgh Post-Gazette that he plans to join the Democratic primary field later today.

He seems like a pretty colorful character, and nobody quite knows what to expect. He told the paper Pittsburgh Taco Truck will be at his announcement.

“No one wants to listen to politicians, but everyone wants to eat tacos. Tacos are the great uniter,” he explained.