Gov. Tom Wolf talks sale of his business, says it was part of succession plan 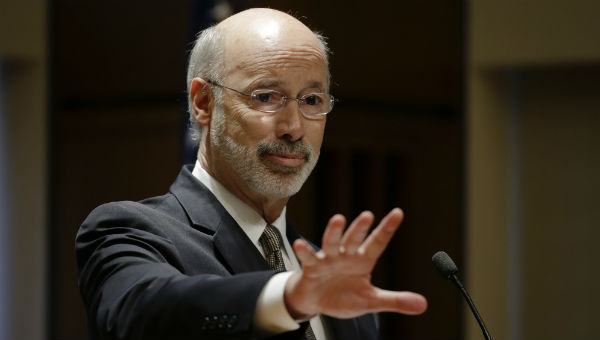 (York) — Gov. Tom Wolf said that when he returned to the Wolf Organization in 2009, his plan was to eventually sell it. He said that was the expectation of other company leaders and the private equity firm that had a stake in the business at the time.

He said the company has always operated under the idea that you should not have “absentee ownership,” and he said the idea of selling it was to save jobs and keep people employed.

Wolf spoke at length about what went into selling the longtime York County family business and how other parts of his finances are handled, in light of questions raised in a July 5 York Sunday News article about his blind trust.

On May 29, the Wolf Organization announced that Quad-C, a Virginia-based private equity firm, has become a majority owner in the business, while the Wolf Organization’s management team owns the rest. The company’s CEO, Craig Danielson, later said Wolf is no longer a shareholder.

The York-based kitchen cabinet and building products company, which dates back to a Wolf ancestor in the 1800s, was a key part of Wolf’s campaign for governor.

Wolf said in the Tuesday interview that he wasn’t involved in the process of the sale and didn’t know details of the transaction because he set up a blind trust to manage his assets. Wolf said that when he stepped down as executive chairman of the board of the Wolf Organization in May 2014, he believed there would be a sale at some point.

“In May of 2014, the company was doing quite well. And I think the process was going to get started shortly. But I don’t think it really heated up until — I don’t think until 2015,” Wolf said.

He described his decision to not be involved in the details of the sale as “a pretty selfless act” and an unusual one, both for public officials in Pennsylvania and business owners in general.

In 2014, Wolf had a 28 percent interest in the business, according to his statement of financial interests. He said he was the biggest stockholder.

“I would imagine if you asked people who own a major stake of any company, big or small, I would imagine there are not too many who would have basically just said, ‘I’m out of this. Someone else is going to take care of the negotiations and sell the company,’ ” Wolf said.

When Wolf ran for governor, he used shares in the business as collateral for a $4.45 million personal loan from M&T Bank, which he used to help fund his campaign.

Wolf said some of the proceeds of the Wolf Organization sale were used to pay off a portion of the $4.45 million loan. Wolf said he was aware of the connection because he learned of the sale and got notification that the loan had been paid off.

Wolf said the company wasn’t sold off to pay his loan.

Here are four other things Wolf had to say in the Tuesday interview about his blind trust, the sale of the Wolf Organization and his finances.

1. Why Wolf put his assets into a blind trust

Wilmington Trust, a subsidiary of M&T Bank Corporation, is the trustee, but Wolf asked Bill Zimmerman, a cousin and former business partner, to make certain investment decisions, primarily related to the Wolf Organization, according to Wolf and an attorney who helped set up the trust.

Wolf said he wanted to avoid even the appearance of a conflict of interest.

“I was trying to do this, not from a point of view of what was better for the company or better for me personally, but what was a more honorable, honest thing to do. And I think I did that,” Wolf said.

Wolf said he used federal guidelines. But he is not bound by them.

Pennsylvania’s Public Official and Employee Ethics Act does not describe any requirements for blind trusts. The Pennsylvania State Ethics Commission does not approve blind trusts in advance of them being used.

Requirements in Maryland, whose statute Wolf has said he previously used as a guide when he was state revenue secretary in 2007 and 2008, and at the federal level are stricter. In those cases, if a public official wants to put his or her assets into a qualified blind trust, he or she needs to get approval for the trustee from a commission, committee or agency.

Earlier this month, a spokesman for Wolf said the governor would not be publicly releasing his trust documents.

2. Wolf said the business was not a campaign prop for him

“I came back to a company that was flat on its back, was about to go bankrupt. I suspended a campaign that I thought was something I really wanted to do back in 2009,” Wolf said.

He said he didn’t know if the company would come back.

“Of course, I was gratified with what happened. And I think I turned it around, and I did a good job. But I certainly didn’t know that at the time,” he said. “And the cold sweats and the sleepless nights I think would attest to that.”

3. He said the sales were part of succession plans

Wolf was part of the sixth generation to run the business.

“The reason it lasted six generations is because every generation, I think but one, basically paid market value to whoever the prior generation owners were,” Wolf said.

He took the same path — working in the business and ultimately running it.

Wolf first sold a share of his company in 2006 but kept an 11 percent stake. He said there was no one in his family who wanted to buy the company.

Zimmerman is Wolf’s cousin and former business partner. They are five months apart in age and “grew up across the driveway from each other,” Wolf said.

Wolf said he gave Zimmerman the authority to vote his shares in the Wolf Organization, because Zimmerman knew the business.

“He knew more than what the investment portfolio manager over at M&T did. …That was basically my biggest asset. Once the company was sold, my assets now are more liquid and are invested in things the M&T trust decides what they want to invest in,” Wolf said.

Wolf said Zimmerman didn’t confer with him about the sale to Quad-C.

1843 >> Adam Wolf opens a store selling dry goods and lumber on the banks of the Susquehanna River, founding what would become the Wolf Organization.

NOVEMBER 2005 >> It’s reported that Wolf and his cousins have drafted a succession plan for the business.

MAY 2006 >> It’s announced that a private equity firm with offices in Boston and San Francisco has become a minority stockholder in the revamped ownership structure of the Wolf Organization.

Weston Presidio acquires a 47 percent stake, while a nine-person senior management team becomes individual shareholders with control of 20 percent of the business.

Wolf, Zimmerman and Hodges retain 33 percent of the ownership.

At the time, the business has about 600 workers.

At this point, Wolf has an 11 percent stake in the Wolf Organization, according to statements of financial interests.

JANUARY AND FEBRUARY 2009 >> Wolf abandons a planned bid for governor and returns to the company as chairman and chief executive officer.

OCTOBER 2011 >> Following layoffs, the Wolf Organization will have about 200 employees, it’s reported.

Wolf tells reporters he will put his assets into a blind trust. “I just want to make sure that everything is above board, and I don’t have any potential conflicts of interest,” he says.

Asked if he would keep his ownership in the Wolf Organization, Wolf says, “That’ll be part of a blind trust. When you put things into a blind trust someone else makes those decisions for you.”

The company’s website says it has about 250 employees and more than $200 million in annual sales.

This article comes to us through a partnership between York Daily Record and WITF.

Adams County to centralize human services in one building