A midstate river often appears orange, and no solution is in sight 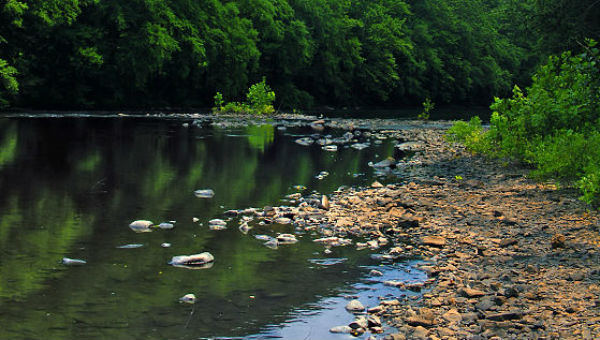 Schuylkill River, West Brunswick Township, Schuylkill County, as seen from the Bartram Trail. The west branch of the river frequently appears to be orange.

(Pottsville, Schuylkill County) — The legacy of coal mining is presenting challenges now for a midstate river, more than 40 years after many underground shafts shut down.

Some old mines will leak constantly – one of the worst points is near Minersville, where an average of 6,000 gallons can come pouring through all day.

Much of the acid sediment settles on the bottom of the west branch of the Schulykill River.

When big rain storms sweep through or the wind whips up, the sediment can get kicked up into the water, turning it orange.

Bill Reichert, president of Schuylkill Headwaters, says his group has been trying to clean up the river and prevent as much drainage as possible since 1997.

“It affects everybody. Everybody downstream. We only have so much water on this earth, and any time you do anything to pollute the water, it affects everyone,” says Reichert.

Reichert says it will take time, money and hard work to get closer to stopping the mine drainage.

“Time and money and hard work are the biggest things. It does take money, these things are expensive to fix and take care of and maintain,” he adds.

The state Department of Environmental Protection says people should try to avoid the west branch of the river, citing potential long-term harm to health.

It says it’s looking for a long-term solution, but a spokeswoman calls it unrealistic to think the problem will go away forever.

A study is trying to determine the best way forward to controlling the mine drainage.