Avoid the guessing game in search for nursing home 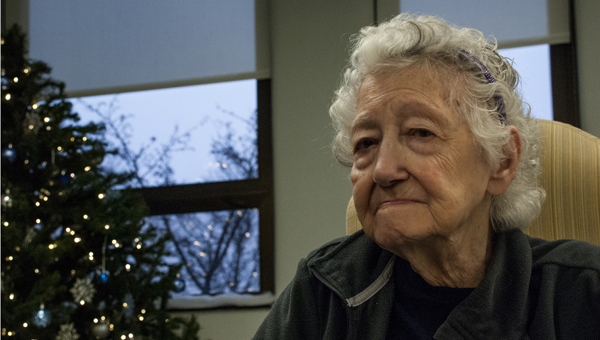 May Clark sits in the common room of the Amber Hills unit of the Cambria Care Center in Ebensburg. Residents visit with family, participate in activities and watch TV in the shared space. Photo by Molly Dureig / PublicSource.

The responsibility of finding the right long-term care facility for his mother, whose memory is clouded by dementia, gnawed at Ron Clark.

Though he sometimes asks 88-year-old May Clark if she remembers him, she seems to know when her son needs consoling. She grips his thick palm, weathered from years as a power plant mechanic, and the familiar touch evokes a smile of relief.

“It’s a shock when you realize you have to put your mother in a nursing home,” he said, pausing to corral his emotions. “You know you have to do it, you don’t know where to turn …. It’s one of the most excruciating things to do, but you have to make a decision.”

Most people will face this responsibility for a friend or family member at some point in their lives as people live longer. It’s particularly likely in Pennsylvania, which has the fourth largest percentage of residents 65 and older in the country.

Often, the search leaves people dizzy with choices and worried that their selection could end up being harmful to a loved one. The horror stories of mistreatment or worse are well known.

But now there are more helpful tools than ever as government agencies face the need for improved systems of looking at care and help for families making these decisions.

The federal government is improving its ratings system of nursing homes throughout the country. In January, staffing information and quality measures that used to be self-reported by nursing homes for the Nursing Home Compare tool will instead be pulled from auditable reports.

That information will expand on the full text of inspection reports that the Centers for Medicare and Medicaid Services [CMS] began releasing in 2012.

However, elder-care advocates and long-term care officials caution consumers against using only online tools to choose a facility. They say the No. 1 priority should be to visit a facility, not just once during the day, but a few more times, during meals and at night.

It can become a job on its own, and it has for some people, like Eileen Graham, an elder-care adviser in Southwest Pennsylvania who helped the Clarks of Davidsville find a personal-care home for their mother.
Ron Clark and his wife, Rosalyn, told Graham they valued safety and cleanliness, and hoped for a nearby facility that had the comforts of home. They also wanted it to specialize in working with residents with dementia.

Graham considered the pros and the cons of several facilities, took tours and then shared her notes with the Clarks. She also helped them access benefits for spouses of veterans. She charges $85 to $125 an hour.
Together, they decided on the Amber Hills unit of the Cambria Care Center in Ebensburg, about 25 minutes away from their Somerset County home.

“There’s a lot of stigma, that nursing homes are dark and gloomy,” Graham said. “It’s never going to be perfect … but there are really great facilities out there.”

The most comprehensive tool to determine what nursing home may be suitable is the online Nursing Home Compare.

Users can see what health violations nursing homes have had, how many hours of care they provide daily to each resident and how many residents develop pressure sores or use antipsychotic medication.

The data also tell a story about Pennsylvania nursing homes in general.

For instance, the news website ProPublica used the data to show that Pennsylvania nursing homes have one of the lowest average rates of serious deficiencies per home in the country. In addition, 28 states have had more Medicare or Medicaid payments suspended because of violations.

On the other hand, CMS data show more than half of long-term residents become incontinent, which surpasses the national average, and Pennsylvania is home to the facility with the second-highest fine amount in the country, according to CMS.

That title is held by the Golden LivingCenter in Lancaster, which was fined more than $582,000 between January 2013 and February 2014 for persistently poor care.

For two years, it has been a Special Focus Facility, meaning it’s subject to more frequent inspections and escalating penalties, according to CMS. In November, CMS listed it among facilities that have shown improvement.

Executive Director Stephen McShane wrote in an email that the home takes “immediate action” when deficiencies are found, and he has hired additional staff and new leaders. The home is currently in compliance with all standards, he said.

With 699 nursing homes in Pennsylvania, according to Nov. 19 data, each home has averaged eight deficiencies per year over three years and three months of mandated annual inspections and complaint investigations.

The national average is six to seven deficiencies per inspection, according to CMS.

Five Harrisburg nursing homes had the highest average rate of deficiencies among the state’s 10 most-populous cities, at 16 violations per nursing home per year. It is followed by Lancaster and Scranton with averages of 10 deficiencies per home annually.

Pittsburgh matched the statewide average of eight, and Philadelphia was slightly higher with each nursing home cited with an average of nine violations a year.

PublicSource used federal data that reports the city based on the nursing home’s postal code to determine this.

Nursing home leaders suggest visiting long-term care facilities multiple times before making a decision. Here are a few tips to take with you:

While the number of deficiencies can show a pattern, it’s the type of deficiency that truly matters to Ron Barth, president and CEO of LeadingAge PA, a trade association that represents 365 not-for-profit senior service providers.

The deficiencies are rated on a scale of A to L, with L being the most severe. About 85 percent of Pennsylvania violations were graded as Ds and Es, meaning there was no actual harm, just the potential for it.

Eight nursing homes were responsible for the 11 most severe violations in the state.

Forbes Center for Rehabilitation and Healthcare of Pittsburgh accounted for three Ls, and Harrison Senior Living of Christiana, Pa., in Lancaster County got two scarlet letters. An L grade means the violation put several or all residents in immediate jeopardy.

Forbes earned its Ls in June for fire safety violations: Not inspecting or testing generators, not maintaining sprinkler systems, and there was no approved program for fire alarm systems. The home reported it made corrections in July.

Eric Dudik, the current administrator, declined to comment because he wasn’t at the home at the time.
In March, inspectors reported that Harrison Senior Living failed to supervise residents at risk of wandering off the premises and neglected to take action after noticing a strong gas odor. It was also cited for not having a current emergency plan. The home told inspectors it updated procedures by May.

“Our mission is to provide a high level of care for our residents,” said Harrison Saunders, chief operating officer of Harrison Senior Living. “We’re thankful to have the light shed on these deficiencies so we can correct them and turn them around, and we certainly have.”

The data points only go so far, and inspectors can’t tell you how you’ll feel about a place.

Barth said he has talked for years about the flawed way the government does quality assurance.

“It looks at process, like did you fill out this form and do you have this staffing ratio,” he said. “It doesn’t look at outcomes, like are the residents thriving or having medical problems. That’s what we need to focus on.”

Meanwhile, you have your instinct. 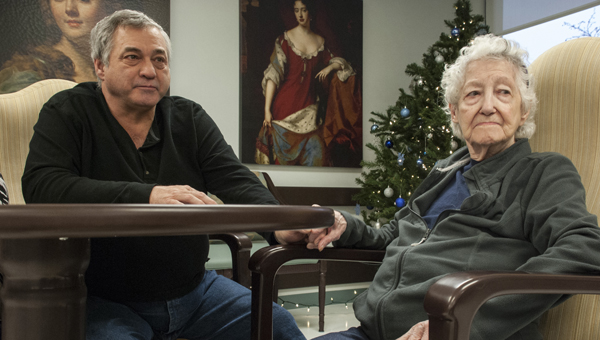 Ron Clark of Davidsville visits with his mother, May Clark, 88, at the Cambria Care Center in Ebensburg. May Clark, who has dementia, has lived in the Amber Hills memory impairment unit since February.

It’s good to make an appointment for the first visit, but then you can also show up during visiting hours.

“You want a transparent, welcoming facility,” said Dr. Stuart Shapiro, CEO of the Pennsylvania Health Care Association, which has 450 long-term care providers as members. “If there’s a nursing home resisting you coming back … reject it.”

To choose the right level of care, Graham, the owner of EG Associates Group, learns about things including the client’s medical problems and their preference between bingo or painting.

Without an adviser, make a list of what the person’s needs are and have a discussion with your local AreaAgency on Aging.

“It can range from 24-hour-a-day medical care to something as simple as help with housekeeping or grocery shopping,” said Ray Landis, advocacy manager for AARP Pennsylvania. “Explore all the options that are out there.”

The cost of long-term care can seem staggering. With an average monthly cost of more than $8,500 for nursing homes, AARP ranked the state as 46th in affordability and access to long-term care services.

Even people with the resources to pay privately at first may end up spending their assets and forced to join Medicaid, Landis said. “That means all Pennsylvanians are impacted by the costs.”

About two-thirds of nursing home residents in the state are already on Medicaid, meaning they have $2,400 or less in financial resources.

Medicare is another safety net, but Shapiro said many people don’t realize it’s limited to 100 days of rehabilitation care, like that needed by a stroke survivor.

May Clark’s room, which she shares with a roommate, costs $1,800 a month. It’s another $300 for medications, adult diapers and other personal items.

She receives $1,130 in veterans benefits, and the rest is paid by Social Security, her husband’s pension and family.

Her spot in the personal care home costs far less than most nursing homes, but it doesn’t feel that way to the Clark family.

“I don’t know what we would do without the veterans benefits, and we didn’t want to just put her anywhere,” Rosalyn Clark said. “I wonder how some people who don’t have anybody and don’t have anything, how do they do it?”

Judge's ruling expected on future of York's schools next week