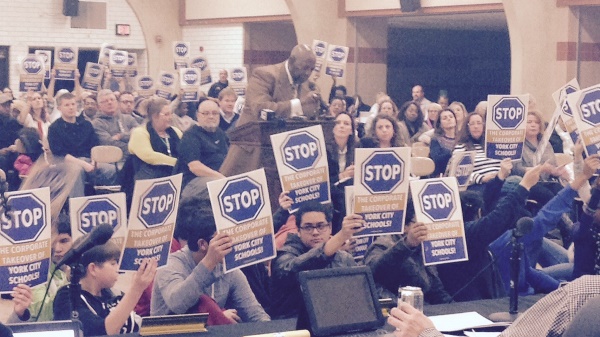 (York) — More details have emerged in the state’s plans for York City School District if a judge approves a takeover.

The state wants to convert all schools to charters, and now says the only alternative for students would be a cyber school.

Lawyers arguing against the receivership have dissected Charter Schools USA’s proposal to run the district.

They’re trying to prove it’s incomplete and inadequate and argue the receivership is arbitrary because it only comes after York’s school board delayed a vote on the charter school contract.

“They asked for some time to get questions that the CRO deemed valid, answered,” he says.

State-appointed Chief Recovery Officer David Meckley says most of those answers will come in the final proposal.

Tonight, the board will also consider rescinding the teacher’s contract that brought them out of compliance with the recovery plan, in an effort to hold off receivership.

“The chief recovery officer came to court and said because we had agreed to an agreement, we’re now in violation of this plan, ” says Attorney Timothy Scott.”The agreement hadn’t been signed, we’re not operating under this agreement, so if that’s his problem, we’ll just take it back.”

But the state’s lawyer Clyde Vedder says it’s probably too little, too late.

“There’s a collective bargaining agreement in place,” he says. “If they want to somehow undo it, that’s after the fact.”

Wolf not the first Pa. leader to eschew Governor's mansion