Jeremiah Sulunteh, the Liberian Ambassador to the United States will be speaking in Lancaster and at Elizabethtown College Wednesday.

Before he does, he’ll appear on Tuesday’s Smart Talk to discuss the impact Ebola has had on his country and what Liberia needs to treat those infected with the virus and stop it from spreading. 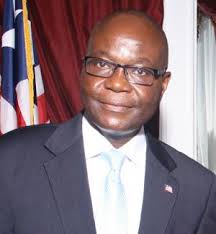 Liberia has been hit the hardest of the five West African nations where Ebola has surfaced. More than 2,700 have died from Ebola in Liberia.

Ambassador Sulunteh has been quoted as saying Liberia needs more aid from the west, including the United States, to bring Ebola under control.

Ebola is the latest crisis to strike Liberia. Two civil wars resulted in the deaths of some 250,000 people.

Ambassador Sulunteh will address Liberia’s place in the world and tragic history along with Ebola.

Also, Pennsylvania Supreme Court Justice Seamus McCaffery announced his retirement from the bench Monday. Justice McCaffrey was one of a number of high-ranking law enforcement officials who allegedly sent or received pornographic emails.

Gina Passarella, the senior reporter for the law journal, the Legal Intelligencer appears on Smart Talk to discuss what’s transpired and what happens next.