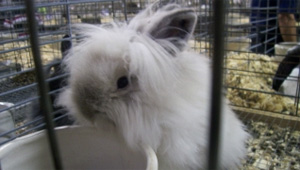 (York) — Fair season is in full swing in the midstate, and one of the most popular gets underway today. Despite its age, the York Fair never stops innovating.

The latest addition to what’s been dubbed “America’s First Fair” is something called a “Goat Mountain.”

“We have a little mountain made out of hay, big hay bales. It’s about 20 feet tall, and there will be about a dozen goats roaming around it. The goats will climb to the top of that and stand on the top and do all kinds of aerial stunts,” saysFair President Gene Schenck.

There’s also a birthing area, which is just as it sounds — a place to watch animals like cows and pigs give birth to offspring.

Adds Schenck: “Perhaps you can watch a cow being born, or a pig. There are bleachers set up and if you happen to arrive at the right time, you can see a live animal birth.”

The fair, one year short of its 250th birthday, will also feature concerts from country acts like Lady Antebellum and Hunter Hayes.

Schenck says about 1,000 seats have been removed in the concert area to make shows more comfortable for the audience.He says ticket sales have been brisk, but he isn’t expecting any sellouts.