After Turnpike accident, a reminder to slow down in work zones 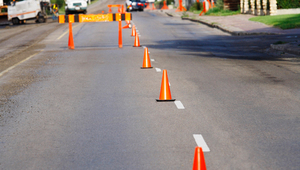 (Harrisburg) — The death of a construction worker on the Pennsylvania Turnpike last weekend has leaders reminding drivers to slow down.

William McGuigan was killed by a tractor trailer while working in a closed lane on the Turnpike in Chester County.

Another Turnpike employee was injured as well.

“Whether it’s a permanent construction zone with concrete barriers and orange cones, or whether it’s more of a temporary kind of a thing, the message is people really need to slow down and pay attention in work zones,” says Carl DeFebo of the Pennsylvania Turnpike Commission.

“People are working out there to make the roadway better for you.”

He says motorists should expect more work zones on the area’s roads because of the transportation funding bill.

DeFebo says police will actually be sitting in construction equipment this year with radar guns, trying to catch speeders through work zones.

Fines for speeding, driving under the influence, or disobeying traffic signs are doubled in a work zone, and those convicted of homicide by vehicle in a work zone face up to five additional years of jail.