When Republican state Senator Mike Brubaker of Lancaster County suddenly announced he would be retiring at the end of the term, it launched a scramble among potential candidates. The two leading candidates ahead of the May 20th primary are both Republican state Representatives: Ryan Aument and Gordon Denlinger.

Representative Denlinger: “I consider him a good individual, I think each of us bring different things to the table.”

It can be a little disorienting to hear comments like this coming from candidates running for office.

For the most part, the fight between these two conservatives hasn’t been much of a fight. Instead, they’ve focused on their accomplishments, their leadership styles, and their backgrounds. 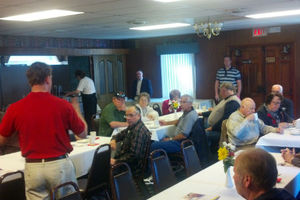 At a recent event, Aument’s booming voice easily filled the room. Events like this have been typical for both campaigns. For Aument, it’s called “Coffee and a Conversation”. At The Gathering Place, tucked away in a residential neighborhood in Mount Joy, Lancaster County, about 20 people showed up. Aument’s laid out his positions and took questions.

“Even more than any individual issue, and again, those individual issues came up, but common in all those conversations was a real desire for energetic, bold, effective leadership. Leadership that gets results, visionary leadership.”

There’s the first signal of a hint of a difference. The 37 year old Aument says he’ll be the guy to go into the Senate, push and push and push until something gets done, and challenge the status quo. His style is more aggressive.

“How do you best advance conservative principles that I strongly believe and I think my constituents believe in? And perhaps you have to stand and boldly stand against bad ideas. I don’t believe you pivot, I don’t believe you move to the center. I believe you can still govern, and find ways to be effective.”

Aument’s coffee and a conversation hit on all the usual issues – property taxes (he wants to get rid of them), education (he wants more accountability), and pensions (he wants a 401 k type plan for new hires).

Ask Representative Gordon Denlinger his thoughts on those issues, and the same answers will trickle out. But spend some time with him, and it’s easy to see why he’s described as gentlemanly.

“Well I think I bring more in terms of experience, life experience. I worked out in private sector for 18 years, so I’ve had a life before government service, and I think that helps me to know what individuals and businesses deal with,” says Representative Denlinger. 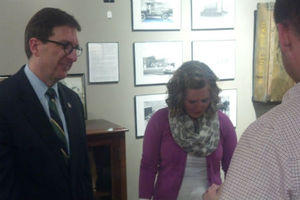 Denlinger, who is 50 years old, recently worked the room at the New Holland Area Historical Society, sharing his story in close conversations. Not the type to raise his voice, some might describe his style as more old-school. Still, he speaks out on reform.

“Running without the endorsement frees me in a certain way to be accountable to the people. And that is the kind of fighting spirit I think people are looking for.”

He’s pitched his campaign as one for the people. His endorsements section of his website only has a handful of prominent names. What it does have is lots of testimonials from the average person. He touts his experience.

“I am a Certified Public Accountant, though inactive at this point, by background, so I have a strong financial background, that of course has opened many doors on the state House side. I think it will also on the Senate side. I’ve been a member of Appropriations Committee in the Senate for 7 years at this point, that would be a skillset, working with the state budget, working with all the key financial areas, tax policy and so forth, that I would seek to take over to the Senate side.”

The district is basically the northern half of Lancaster County, from Manheim Township up. That means Elizabethtown, Lititz, Ephrata, and East Cocalico, among others.

Representative Aument is endorsed by the Republican Party of Lancaster County, and has the support of many colleagues in the General Assembly as well.

So, there are a lot of differences that really don’t draw a very fine distinction between the two. How’s a voter to choose?

Aument’s campaign is stuffing mailboxes with flyers pushing voters to look at Denlinger’s use of per diems, mileage reimbursements, and other compensation(note: link distributed by the campaign). Records show Aument hasn’t requested similar payments. That’s the kind of fact Aument wants voters to think about.

Denlinger says others from Lancaster County received more in reimbursements than he did. He instead points out that his campaign has not questioned decisions by Aument.

Walking into the voting booth May 20th, it may just come down to a gut feeling. And when both candidates are nearly the same on every issue, that’s about as predictable as a coin flip.

Race for seat in Lancaster County turns away from policy