What to look for on Smart Talk Friday: 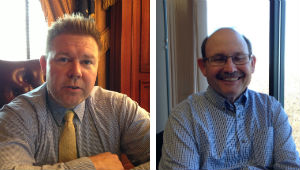 From left to right: Sen. Alloway and John Arway

It would strip the Pennsylvania Fish & Boat Commission and Pennsylvania Game Commission of their authority to designate endangered species and streams. The agencies would instead submit proposals to the state’s Independent Regulatory Review Commission (IRRC) — and ultimately lawmakers — for review.

Supporters say it will ensure a consistent, accountable process of designating and permitting that balances the environment and the economy.

Critics say it politicizes the process by which Pennsylvania protects its fish and wildlife.

Mary Wilson explores the bill’s nuances in separate interviews with midstate Senator Rich Alloway and PFBC Executive Director John Arway and, who stand on opposite sides of the issue.

Transportation funding was one of Governor Corbett’s top priorities entering the legislative session, and he signed HB 1060 into law just before the Thanksgiving holiday.

This week’s Smart Talk Friday concludes with a trip to The Vineyard & Brewery at Hershey, where they’ve recently debuted a “Special Ops” lineup of small-batch craft brews to benefit a planned memorial to fallen soldiers at the PA National Guard headquarters in Ft. Indiantown Gap.

Brewmaster Ryan DeLutis strikes a pose by his fermenting tanks and VP Mike Wilson pours a pint of “Flash Gourd’n” in the tasting room.

All three were killed by a single roadside bomb explosion in Afghanistan in 2011.

Captain Dana Howett says their closing in on one-third of the at least $60,000 necessary to complete the memorial.

You can email Captain Howett (dana.m.howett.mil@mail.mil) for details on how to make a direct contribution.

Listen to the program: