I’ll be honest: I was more than a tad skeptical when a friend suggested I try a meal at the Chocolate Avenue Grill in downtown Hershey.

I had been told the grill has good food, better than anyone has a right to expect because it’s located in a town that’s not a town but rather a resort that fills up with tourists. It’s right along the main drag named Chocolate Avenue and within sight of the famous park.

I figure “location, location, location” is enough to draw the kind of crowd that might dine once during a visit and never come back. So a restaurant’s food quality and service need only be adequate enough to keep clients happy — or least not litigious.

Well, I admit it: I was wrong.

Yes, the grill can have the feel of a Jersey Shore place during the summer months as vacationers line up to be given beepers because they don’t know where else to go. But the feel isn’t the reality. 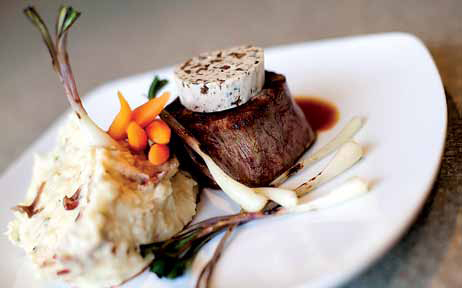 Although the grill was crowded during my visit on a warm summer evening, every staff person I met was more than friendly, the wait was minimal, the menu was interesting and the food was first-rate.

There’s nothing fancy inside or out, and the outside tables are right along the main street. And while you can see parts of Hersheypark from this location, it can get a little loud because the street traffic is right there.

But let me tell you about the menu. It has everything: appetizers, soups, salads, wraps, sandwiches, burgers, a kids menu, daily specials and creative regular entrees.

It isn’t cheap but, given its location, it’s not price-gougey either.

There’s an inventive drink menu, including something called a “milkshake martini,” and, of course, some chocolate-based stuff. But there are also nice wines and plenty of handcrafted beers such as Goose Island, Victory Headwater Pale Ale and Stoudt’s Scarlet Lady.

Appetizers include seafood spring rolls with crab and shrimp, spanakopita (delicious Greek phyllo-dough filled with spinach and cheeses), wings, calamari and more, all priced in the $7 to $10 range.

A dining partner and I split an appetizer called “baby bucos,”three slow-roasted pork baby osso bucos with honey barbecue sauce, served with sweet potato fries. At just $9, this dish is a meal in and of itself or a tasty warm-up to share.

There are multiple salads that could serve as meals: grilled chicken Greek salad; citrus spinach salad; south of the border salad; calamari salad; Pittsburgh steak salad and more. They run in the $10 to $12 range.

Every entrée comes with a nice house salad served with (trust me) homemade dressing.

In addition to wraps, sandwiches and burgers, there is also a corned beef Reuben and a Maryland crab melt with tomatoes, cheese and onion — all in the $10 or less range. (There are vegetarian selections, too, such as a roasted veggie wrap.)

We went with entrées. My dining partner had the Bistro Tender, two large shoulder-cut beef medallions with a rosemary-and-mushroom glaze and mashed potatoes, $24, and rated above average. I chose sautéed Key West scallops with a citrus butter sauce served with an unusual but tasty pineapple and almond risotto and fresh asparagus ($26).

These entrée portions were very generous and required take-home boxes. The scallops (five large but tender ones) were perfectly cooked, delicately seasoned and totally recommended.

There’s a wide range of entrées — salmon, tuna, flounder, chicken, steak, veal and pasta — priced in the high teens to the low- and mid- 20s. It’s hard to imagine anyone not finding something to his or her liking among the offered dishes.

This place isn’t gourmet dining by any definition. But for an eatery in the middle of a Central PA resort town, it is far better than I expected. It’s family-run, family-friendly, casual, cozy and reasonably priced.

If you are in Chocolate Town, a lunch or dinner at the Chocolate Avenue Grill would be a smart addition to your day.

The Phantom Diner has been a longtime restaurant reviewer for Central PA Magazine.